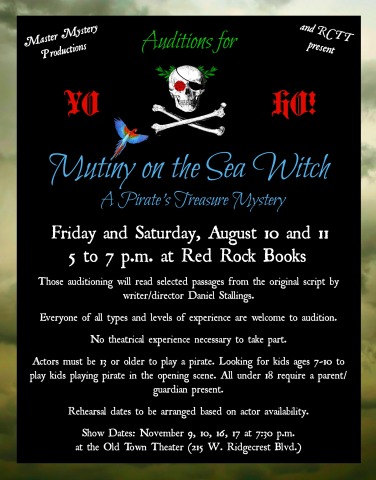 Yo Ho! It’s time to set sail for our twenty-first Master Mystery Production! Have you ever wanted to be a pirate? Or just wanted to dress up like one? Now here’s your chance as our next show will hit the high seas for a swashbuckling, treasure-seeking fantasy adventure to the age of battling buccaneers. But we need a cast of pirates to make this happen. Ready to hunt for gold? Is the pirate’s life for you? Join us for auditions for Mutiny on the Sea Witch, a pirate’s treasure mystery!

MUTINY ON THE SEA WITCH

Mutiny on the Sea Witch is a four-day family-friendly mystery play we’re producing in partnership with Ridgecrest Community Theatre Troupe (RCTT). This will be the final Master Mystery Production of our 2018 season, and our first collaboration with RCTT on a show. The play will also be the first MMP show which will have parts written for kids. We need children ages 7 to 10 to play Suzie and her friends in the opening scene, and we’ll need anyone over the age of 13 to play the crew of pirates during the bulk of the show. Anyone under 18 requires parent/guardian permission and a parent/guardian present at auditions, rehearsals, and performances. With the exception of Suzie, Cutlass Kate, Moll Flint, and Polly, the rest of the pirates can be played by any gender. The show dates are November 9, 10, 16, and 17, 2018 at 7:30 p.m. at the Old Town Theater (215 W. Ridgecrest Blvd.).

What starts as a journey into a child’s boundless imagination soon transforms into a swashbuckling sea voyage of mystery, mutiny, and buried treasure.  Precocious and creative Suzie gathers her friends together for a game of pirates that whisks all of us to the shores of Charleston, South Carolina in the 1700’s.  Suzie tells a tale of her ancestor, the fearsome female pirate captain Cutlass Kate, the saber-swishing scourge of the Colonies and the Caribbean.  But it’s not all sword fights and talking parrots in this yarn.  When an act of mercy leads to an accusation of cowardice from an unknown source, a mutiny threatens Kate’s control of her ship.  Just as she was about to undertake the greatest coup of her seafaring career: the hunt for The Loot of a Thousand Ports.  As rivals on sea, on land, and on her own ship breathe down her neck, Kate must discover the instigator of the mutiny, secure her captaincy, and find this legendary treasure…or else it’s a one-way trip to Davy Jones’ locker.

SUZIE — Filled with imagination and a sense of dramatic effect, Suzie is a young girl between the ages of 7 to 10 who loves to tell stories to her friends in the grandest way possible.  She is distantly related to Cutlass Kate…or so her father has told her.  Suzie is warm, generous, playful, creative, and fiercely independent, and it is through her imagination we hear this tale.

CAPTAIN KATHERINE LANDLESS (CUTLASS KATE) — Captain of the notorious Sea Witch, a pirate ship that was the scourge of the Spanish Main in the 18th century.  Also nicknamed “The Mad Maiden,” “The Pirate Queen,” and “The Siren of the Spanish Main,” Cutlass Kate is a formidable pirate who uses trickery and cunning instead of brute force to secure her plunder.  Intelligent, cultured, and well-spoken, she is a brave and capable captain who also keeps things private from her crew.  She is not very open with her life prior to piracy.  She has devoted much of her piratical career to finding the fabled Loot of a Thousand Ports.

FIRST MATE QUICK — First Mate under Captain Kate on the Sea Witch.  Ambitious, driven, even career-minded as far as piracy is concerned.  Loyal to whoever would provide him or her with the best advantage, Quick has all the hallmarks of a double agent.  Quick is sharp-tongued, sharp on discipline, and a fierce devotee of the Code of Conduct.  He or she is one of the key movers and shakers of the mutiny.  However, Quick doesn’t underestimate Kate’s prowess.  Can be played by either gender.

QUARTERMASTER JOYCE — Quartermaster for the Sea Witch.  Materialistic and greedy, Joyce is always keeping his or her eye on the bottom line and believe the measure of someone’s worth is in their wealth.  Having gotten into piracy merely for the plunder, he or she is unconcerned with the feelings of others and only wants to fatten his or her purse.  Also hungry for the Loot of a Thousand Ports, Joyce wants the lion’s share and helps motivate the mutiny to ensure the largest take.  Can be played by either gender.

COXSWAIN PIERCE — Coxswain for the Sea Witch, the one who pilots the ship.  Temperamental, easy to anger, always ready to fight, Pierce is a brilliant navigator but a bad negotiator.  At the first possible hint of accusations, Pierce is usually the loudest voice rallying the crew against it.  He or she is the rabble-rouser, the one who lights the flame of mutiny in the hearts of the crew when the strange evidence pops up.   Can be played by either gender.

ONE-EYED JAQ — Ship cook aboard the Sea Witch.  Jaq is just in it for the adventure and thrill of being on the sea.  Jaq has blank loyalties; He or she will serve whoever is in charge.  Jaq is not much of a fighter nor the sharpest sword in the scabbard and prefers the safety of the galley over the tension on deck.  Everyone generally like him or her, mostly because Jaq is the best cook on the Seven Seas.  Jaq is particularly friendly with Polly the Parrot, who often keeps him or her company in hopes of getting a snack.  Can be played by either gender.

MOLL FLINT — Chief gunner on the Sea Witch.  The only one who remains loyal to Kate during the mutiny.  She is a tough, hard-as-ship’s-biscuits, no-nonsense counterpoint to Kate’s more graceful command.  She doesn’t have the greatest patience or coolest head, but she is fervently loyal to her captain ship.  She is a skilled markswoman and swordswoman who has no issues holding her own in a fight.  Even so, Moll has reservations when it comes to Kate’s dream of The Loot of a Thousand Ports.

POLLY THE PARROT — Captain Kate’s talking pet parrot.  Given to Kate as a “gift” (bribe) from a South American port who asked not to be attacked and plundered, Polly is her companion on ship, and she is very fond of the bird.  Polly enjoys full reign of the ship and is a curious bird who likes to stick her beak into unwanted places.  Squawking on the action in her typical parrot fashion, she is a source of comic relief and bright color in the show.

And a whole crew of pirates and Suzie’s friends!

Rehearsal schedule will be arranged after auditions to accommodate actor availability.  We plan to meet twice a week.  If you are interested in auditioning, but cannot make the audition dates, email us at mastermysteryproductions@hotmail.com or message Master Mystery Productions on Facebook to schedule a private audition.

So please come join us at auditions on August 10 and 11 and embark on a voyage into a world of fantasy, mystery, and adventure with Master Mystery Productions.

Reviews about Master Mystery Productions from past clients, actors, and press.

Visit Master Mystery Productions on Facebook to learn more about the show.

We hope to see you at auditions and later at Mutiny on the Sea Witch!