Summer is a time to get out and celebrate. And what better thing to celebrate than the release of a debut mystery novel by a local author? We celebrated the release of writer/director Daniel Stallings’ debut novel, Sunny Side Up, with a book signing only we could invent. We gave it the Master Mystery Productions touch with plenty of secrets, scandals, suspects, and shocking surprises. What we created was an original and totally interactive experience for our nineteenth show, a show we called Famous Last Words.

Sticks and stones may break my bones…but words will never hurt me. That oft-said maxim served as the jumping off point of our original story of a book signing gone wrong when the non-quite-dead bones of a cold case rise from the grave once again. Marcus Watts announces he intends to publish his late wife’s last true crime book about a celebrated double homicide case. But several people at the book signing have serious issues about this manuscript and want to stop it. And Marcus. Because not long afterwards, a statue on a high shelf comes tumbling down and just misses Marcus’ head, proving that someone is out to silence his words as well. Who could it be? Our audience had to meet all our sneaky suspects, hear their testimony, and put together the complex puzzle pieces to one of our most tricky cases yet.

Putting together an interactive show, particularly one as interactive as this one, is always a challenge. Shows set in modern day can be tricky too, as there’s little research to pull from. But with a super talented and dedicated cast of performers such as we had for Famous Last Words, the sky’s the limit. It was a delight to watch them grow and succeed as theatrical artists during rehearsals, to have them share ideas and develop their suspect from the toe of their thigh-boots to the top of their newsboy cap. They were funny, nuanced, emotional, and layered in their performances. There wasn’t a single one-note performance from any of them. 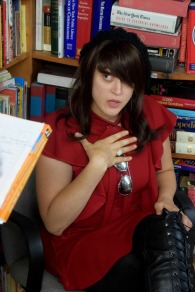 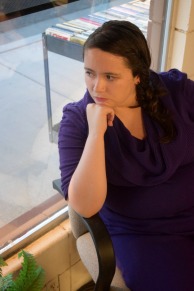 On the day of, everything changes. How does the cast fare with a flesh-and-blood audience. And how does the audience react to the character? With an interactive show like Famous Last Words, there’s no barrier between the actor and audience. Everything is up close and personal.

Audiences loved the show and its interactive nature, surprised at how well it worked in the store. Red Rock Books was, as always, a perfect venue, becoming a theatrical playground for one magical night. But we think the ones who enjoyed it the most were the actors. Getting to engage with the guests on a deeper level, toy with them, answer their surprise questions, flesh out their portrayals, and have a blast doing them touched their hearts. One actor said this was the most fun she ever had in a show.

The intricate, emotional testimonies of each suspect were enriched by a fabulous audience who was with us every step of the way. And the copies of Sunny Side Up we sold as part of the tickets for the show? Completely sold out. Red Rock Books has to order more to meet demand. It was a huge success, and one of the most relaxed and enjoyable evenings we’ve ever had at Master Mystery Productions. We owe it all to our outstanding cast and crew, the generous hospitality of Red Rock Books, and our amazing guests. We couldn’t have done it without you!

At Master Mystery Productions, we love our awards and traditions. One such is the presentation of the Diamond Mask Awards for Excellence in Performance, the audience-voted awards for their favorite actors and actresses who gave them performances they adored. Two were presented for Famous Last Words to two very deserving performers. Congratulations Rah Harrington and Brianne Hardwick for your Diamond Mask wins!

Famous Last Words reminded us how much fun it is to work at Master Mystery Productions, why caring for our actors and audiences is so important to us, and why, even though we talk about some of the darker and scarier sides of human nature, we believe in creating a happy, healthy environment for our performers and guests. Famous Last Words was about entertaining everyone, actor and audience. And we were entertained!

Wish you could have seen Famous Last Words? Well, if you’re a bookstore wanting to host a signing, just contact us at mastermysteryproductions@hotmail.com or through our Book a Show Page to book your own performance of Famous Last Words!

And if you’re an audience member, never fear. We have one heck of a show headed your way. It’s glamorous, deadly, shocking, and guaranteed to be a show people will talk about for years to come. Because we’re returning to our Hollywood roots for a stunning and surprising interactive mystery drama set in the universe of 1960’s Hollywood. Ever wonder what would happen if you mixed The Twilight Zone and Whatever Happened to Baby Jane? You get to find out in our star-studded show starring a multi-award winning cast entitled…

WHAT HAPPENS AT SUNDOWN

Those performances will be September 21 and 22, 2018 at Ridgecrest Presbyterian Church as part of Ridge Writers’ Weird Weekend 2018. Tickets will be $20 and will go on sale in mid-August at Red Rock Books.