“What need we wars and revolutions when there’s cake to be had?”

Madame la Comtesse (The Countess of Nowhere in Particular) has rather…eccentric notions of diplomacy and privilege, but at a time when the aristocracy fell under the looming shadow of rebellion and destruction, perhaps cake was all they could care about. The period just on the cusp of the French Revolution is one of the most complex and fascinating to study. The gilt and riches of the Versailles court contrasts sharply with the rampant poverty and burning hearts of revolution. It was a world we always wanted to explore in a Master Mystery Production. And now we can! Writer/director Daniel Stallings will share his inspirations for the creation of our 22nd show, Eat Cake, a revolutionary murder mystery farce.

WARS AND REVOLUTIONS: The Making of Eat Cake (Part One)

Eat Cake had a rather unique origin. Its genesis began during rehearsals for our last Amargosa Opera House show–Exit Prima Donna. Sometimes, during rehearsals, an actor is unable to attend a rehearsal due to a scheduling conflict. We usually find a stand-in for that rehearsal. At one such instance, an actor filled in for the role of Giuseppe Rodolfo, the oversexed tenor of the opera house, and provided a…unique interpretation of the character. Certainly not the suave, charming, predatory Lothario we expected. A man more effeminate, flamboyant, extravagant, and frivolous. It was absolutely hilarious, and the actors were rolling in their seats with laughter. Now the interpretation was totally wrong for Giuseppe…but it was brilliant for his own creation. And so, the Marquis Mauvais was born.

But the Marquis Mauvais wasn’t the Marquis Mauvais yet. He was simply a foppish aristocrat with a flamboyant personality. He needed a home court. Which one? My thoughts turned back to an MMP muse staple–the venue. We all loved Amargosa Opera House. It was phenomenal. The murals by Marta Becket are very Rococo in style and surround the walls. All manners of characters frolic across the paintings. One that immediately pulled my attention was a Marie Antoinette-esque aristocrat in her wide dress and kicking up her heels. And what legendary location is highly decorated with paintings and Rococo frills? Versailles.  Perfect. Our aristocrat had a home, and I had a story that fit the classical splendor of Amargosa Opera House exquisitely.

It’s all well and good to say “The next show will be in Versailles.” But you have to have a story to tell. I decided, from the outset, that I wanted to write a wild comedy to change it up from the emotional drama of my last Amargosa show. Farce, an exaggerated style of classical theatrical comedy, seemed the most natural fit. As mentioned earlier, one of the most fascinating parts of this era in history is the severe division between the classes, the contrast of the excessive aristocracy and the dirt-poor peasantry. What would happen if royals and revolutionaries were forced to occupy the same apartments in Versailles, each trying to accomplish their own diabolical plan and things not going to plan? The idea was impossible to ignore. With our foppish Marquis leading the charge, we knew there was a hilarious show waiting to happen.

In terms of additional inspirations, I didn’t stray too far from the heart of the French Revolution. A BBC comedy mini-series called Let Them Eat Cake, starring Dawn French and Jennifer Saunders, provided a great deal of inspiration for the tone of the show. Obviously the period is the exact same, so it gave us good groundwork on how to design a comedy around this era. But I promise you that the story of Eat Cake is completely original. We wanted to add our own touches. The key to farce is exaggeration. My characters are more extreme depictions of certain 18th century tropes played up for humor: a flamboyant marquis, his more grounded fiancee, a Parisian harlot, a cheerful, lives-in-her-own-fantasy-world countess, a nasty gossip, a revolutionary bent on destruction, a double-crossing maid. And, of course, Marie Antoinette.

If I had to give the show any sort of theme, it would simply be “trust no one.” Usually, we try to disguise the criminal by making everyone seem innocent in some way. For once, I wanted to be blatant. Everyone is up to something nefarious in Eat Cake. Innocence? Not this group. But who’s responsible for the crimes in the show? That’s for you discover as you take a big slice of our Versailles cake. Hope you’ve saved room for dessert. 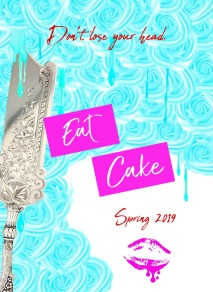 You got a small taste of the characters in Eat Cake. But in our next behind-the-scenes blog post, you’ll get a full bit as our actors talk about how they created their roles without losing their heads in Royals and Rebels: The Making of Eat Cake (Part 2).