The year is 1943.  The location: The Hollywoodland Tea Shop.  The action: Murder of a movie star. Back in 2015, we introduced the world to Master Mystery Productions and to Goodbye Hollywood, our murder mystery tea set in 1940’s Hollywood. The show was a huge success, the can’t-miss event of Spring 2015 that has left an indelible impression in the community. The original murder mystery tea spawned a stage expansion where more secrets and surprises were revealed, and it seemed the Hollywood saga had finally reached the end.

Life is cyclical, and stories come back in fashion. One story that we never seemed to escape from was that of a Hollywood of yore…and the earth-shattering impact it had on its characters. While What Happens at Sundown, the latest offering from Master Mystery Productions, is more of a spiritual successor than an outright sequel, it nonetheless pays homage to the one that started it all. Here we’ll learn just how Goodbye Hollywood affects What Happens at Sundown, just ahead of the new show’s world premiere, and how What Happens at Sundown works as the next chapter in our growing Tinseltown universe.

CHAPTER THREE: The Making of What Happens at Sundown (Part 4)

Interactive murder mystery. Glamorous Hollywood play. Intense family drama. Goodbye Hollywood was billed as all three. We won’t delve too deeply into the making of Goodbye Hollywood here. You can read all about the show in our Murder in Retrospect post on Goodbye Hollywood, featuring special guest, Brianne Hardwick, who originated the role of June Schulz.

The Hollywood of the 1940’s was not the same as the Hollywood of the 1960’s, where we find ourselves in What Happens at Sundown. In Goodbye Hollywood, we were examining a movie star at the height of her career at a time when the studio system made stars and sorrows, when the movie industry was rigidly controlled by the Big Eight and seemed as both heaven and hell for those who worked in it. The flawless masks of the movie stars sheltered deeply-felt pain and insecurity. Fast forward twenty years and the world has changed drastically.

WWII tore a giant rift across the globe. The 1950’s saw the astronomic rise of television as a predominant form of entertainment. Audiences grew tired of the old Hollywood format of film making where films supposedly shot all around the world were actually just shot on sound stages and on the very identifiable California landscape. Films started to look too artificial for audiences. Movie studios had to change. And finally, many of the great stars of the 30’s and 40’s were now entering middle age and beyond, forcing many out of jobs in the industry. Some ended up destitute.

This is the landscape where we find ourselves in our latest Master Mystery Production. What Happens at Sundown is, in many ways, a play about memory and repercussions. It’s about how the sins of the past affect the present. What these characters did in their past during the Golden Age of Hollywood now haunt them in this strange, new world. There are regrets, insecurities, and extortion. There’s an awful lot of pain and resentment that boils just beneath the surface. Regrets about aging, disillusionment from the harsh realities of show business, resentment at being left behind and forgotten. Why do these Oscar-crowned actors stay in Hollywood? As Helena Rothschild says, “But still…it beats staying at home staring at a little gold statue and asking yourself ‘Is this the end of the line?'”

In this show, memories of the past fill every line, so the connections to Goodbye Hollywood are natural.  June Schulz, Lila Schroeder, and Geoffrey Challenger were colleagues of our What Happens at Sundown characters. Helena Rothschild and Lila Schroeder got into constant cat fights. June Schulz is remembered as a “Gorgon” and a “dragon,” her frightening momager ways rendered monstrous in memory. Geoffrey’s career has been reduced to ham and cliche. None are remembered all that fondly in the twenty years since their deaths. But their deaths in 1943 run a thread of sadness through the group as Helena remarks, “We’re all fading away.” 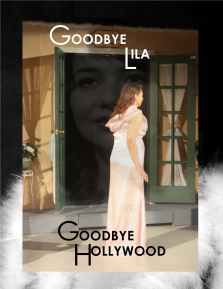 Other references to the popular 2015 show are physical rather than spoken. Lila’s pink satin gown–the famous “Buffalo in Taffeta” dress–makes an appearance in Helena’s dressing room as a kind of forgotten relic of a dead Tinseltown. Lila’s tea time hat and June’s black fur capelet make an appearance on Madam as a hunter wearing the “skins” of her fallen colleagues, proud and predatory. And there’s a little Easter egg to be seen on a very familiar flask.

But perhaps the biggest connection is a shocking secret we reveal at the very end of the show. But to reveal it here will be a spoiler. Only by attending What Happens at Sundown will you learn a truth that will shake the very foundation of the Hollywood universe of Master Mystery Productions.

And while this may be Chapter Three…who knows what will happen in Chapter Four?

There you have it. With What Happens at Sundown, the twentieth Master Mystery Production, premiering Friday, September 21, we’re getting ready to unveil our most gasp-worthy and shocking finale yet! The only way to find out what happens is to attend the show. Tickets are still on sale at Red Rock Books!