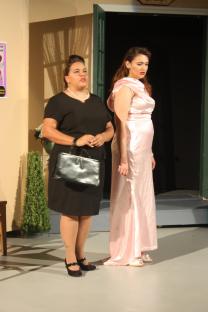 One of June Schulz’s most memorable and devastating quips in the original Goodbye Hollywood referred to a beautiful, custom-made pink satin gown where she said to her daughter, movie star Lila Schroeder, “Frankly, my dear, you look like a buffalo in taffeta.” The line even gets a slight callback in our current show, What Happens at Sundown, a play full of references to the 2015 hit. While we promise no wild animals are dressed to the nines, our costumes have earned a reputation as being some of the most beautiful and impressive out there. Period and historical costuming is our strong point, and here we give you the scoop on the designs in What Happens at Sundown.

BUFFALO IN TAFFETA: The Making of What Happens at Sundown (Part 3)

What Happens at Sundown is a show about transitions. The year is 1963. The war-torn 40’s and the safe and sanitized 50’s were over. But the giant social upheaval, hippie movement, and so on hadn’t quite started yet. The studio system was all but dead. And some people had a harder time make the move into the swinging 60’s than staying in their familiar, if slowly dying past. That was the idea we embraced as we designed the look of the show: A cast of people from all walks of life and at various stages of modernization. Some are fully embracing the 1960’s style. And some are trapped in their Golden Age of Cinema past.

In terms of design, many factors have to be considered: character’s age, lifestyle, economic status, style choices, social position, job, etc. Add on to that the era of the show, and you can come up with an eclectic mix of ideas. Some characters embrace the 60’s without issue like Victoria Camden and Miss Lockwood, both young women of the era. Wearing shift dresses and leggings accented with a pin in bright colors, these ladies are modern, practical, and stylish. And yet others such as former film studio titans Helena Rothschild and Kim Hyatt are more vintage in their dressing, representing their status as bygone silver screen legends. While Helena has moved somewhat with the times in terms of her silhouettes, Kim has remained firmly lodged in the 1940’s in terms of dress, makeup, and hair, as she had been institutionalized back in the 40’s and this is her first time out of the hospice.

Madam has a unique style all her own. She doesn’t follow the specific rules of an era’s fashion trends; She makes her own. She is chic and glamorous in her own definition. She was designed to look like her own woman and not like anyone else. A big theme with Madam is her predatory nature, her dangerous Cruella de Vil vibes she emits throughout the play. So we clothed her in furs and feathers and blood red and greens that echo camouflage and–even more shocking–accessories from dead colleagues such as Lila Schroeder’s black-and-white hat she wore the day she died in Goodbye Hollywood. It was a glamorous, Hollywood imagining of a hunter dressed in animal pelts. But we assure you no animals were harmed in the making of Madam’s couture.

For this show, we fully embraced color in a way we really haven’t done before. Deeply saturated primary colors, jewel tones, pops of accent color in every shade of the rainbow fill this show and perfectly celebrate the bright, technicolor style of the 1960’s. Helena wears gorgeous shades of watermelon pink, ceylon sapphire blue, and rich velvet accenting leopard print. Kim is resplendent in royal blue and ruby red, while Madam is suitably chic in greens, blues, and geometric black-and-white accented with pops of red. Yellows and purples are the favorites of Bob, Victoria, and Miss Lockwood.

But it’s not just the costumes that got the period treatment. Set dressing and props were treated with care to give them the Hollywood treatment. We even got vintage matchbooks for many of the important scenes in the play, giving the show a real authentic flavor of the age. Our What Ever Happened to Baby Jane? homages abound in set dressing from Kim’s blond wig she uses for her TV show character to a wheelchair used as one of the set pieces as an homage to Blanche Hudson. We made our own prop cigarettes for the show. The callbacks to the original Goodbye Hollywood are subtle and beautiful from a telltale flask to a famous pink gown to a single gesture with a turban. Fans of the original show will find lots of new secrets, while new audience members will join us in a whole new magical world.

Things were chosen carefully to reflect the character’s taste and circumstances. Take Helena’s dressing room. We wanted to show glamour under reduced circumstances, a former studio darling and silver screen goddess who has lost so much and possesses only the mere ghosts of glamour. She has beautiful trimmings: a perfume bottle, silver mirrors, velvet-lined jewelry box, precious jewels. But it’s all tempered by dust and decay. The silver is dirty. The jewelry box has holes exposing the lining. The jewels are few and select, suggesting that many have been sold to bolster dying fortunes. It’s a carefully curated effect that the audience is aware of on more subconscious levels.

And that, naturally, should be the effect of all costuming, set dressing, and props. 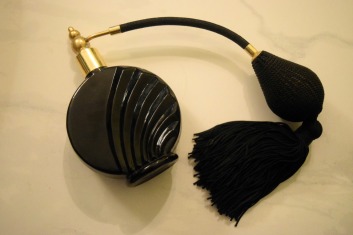 We can’t wait for you to see this show! Tickets are on sale now at Red Rock Books!