“It’s nice to be remembered…”

Memory is powerful. It can inspire. It can hurt. It can motivate. It can hold you back. It can be the most beautiful or the most frightening thing in the world. And memory forms the essential backbone of our landmark twentieth Master Mystery Production, a play about memories, family secrets, and the price we pay to protect them called What Happens at Sundown. We delved into our own memories of past Tinseltown mysteries to create this show, and you will get a chance to learn about the story from writer/director, Daniel Stallings, about the creation of this powerful show.

REMEMBER: The Making of What Happens at Sundown (Part 1)

Shows spring from strange places sometimes. A word, a place, a time, a character will inspire me. What Happens at Sundown was inspired by all these things.

The starting point for this production was our collaboration with Ridge Writers for our fourth Weird Weekend. Weird Weekend is an annual celebration of the stranger side of our corner of the Mojave Desert, and one of the most unique facets is that we are a major filming destination for commercials, television shows, and feature films. Many a famous actor has stepped on our sands, and some of our locals even became extras in these features. Hollywood is a part of our weird and wonderful heritage, so it makes sense to celebrate it.

But it’s not enough just to do a story about filming in the area. I wanted to do something a little special. The desert is the home of Hollywood since the early 1900’s, so why not set something further in the past? An impromptu performance by one of my past actors as Baby Jane sparked the idea of the 1960’s in Hollywood. An era of remarkable transition. Television was growing. The Golden Age of Cinema was fading. Stars of yesteryear were starting to dim and burn out. But some wouldn’t go out without a fight. When the idea of The Twilight Zone entered my head, I realized what a natural fit it had with What Ever Happened to Baby Jane? Both dealt with horror. One represented the rise of TV and other echoed the dying studio system. Put them together and you had a really magical idea for a story. 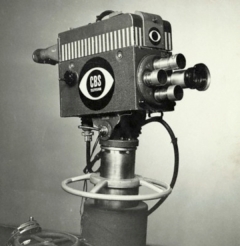 Audiences will get to enter the set of Sundown, a popular horror TV show in the 1960’s shooting on location in the Mojave Desert. They are on location to shoot a new episode starring two leading ladies from the 40’s: Oscar-winners Helena Rothschild and Kim Hyatt. But the shocking murder of a cameraman may cancel their comebacks. Because everyone in the cast and crew has a dangerous secret they’re hiding. And someone is willing to kill to protect it. Guests are encouraged to dress in their Hollywood finest to partake in this play.

The references to the starting inspirations are clear. Two actresses in the twilight of their careers much like Joan Crawford and Bette Davis when they filmed Baby Jane. More overt references occur in our set dressing and costumes. The Twilight Zone is referenced in the television show premise and by a chilling opening monologue delivered by Diamond Mask Winner, Cat Kreidt, who plays the director of the show. We also weaved into the story references to the films and shows shot in the Ridgecrest area along with callbacks to our last Tinseltown adventure–Goodbye Hollywood–creating an almost mythology and timeline for the series. And let’s not forget the slow descent into madness one character will have to face. I don’t want to give away too much, but this play definitely has a unique spark to it, making it one of my favorite scripts ever. I can’t wait for you to see all the secrets we have in store.

AND CUT! There’s the scoop on the story, but who has been cast as our leading ladies and gentlemen? Who are the sneaky suspects to this terrifying tale? You’ll find out in our next behind-the-scenes post, Roll Credits: The Making of What Happens at Sundown (Part 2)!

And don’t forget to get your tickets!