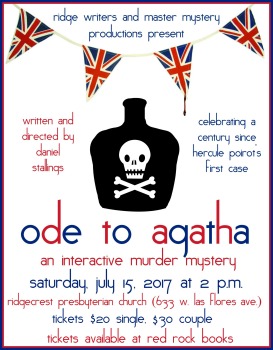 After spending a glamorous springtime in Paris, we’re going to hop across the Channel for our summer holiday as we plan our lucky thirteenth Master Mystery Production, Ode to Agatha.  July 2017 marks the one-hundred-year anniversary of the murder of Mrs. Emily Inglethorp which takes place in Agatha Christie’s first novel, The Mysterious Affair at Styles.  Hercule Poirot, the world famous detective, made his debut in that book, solving the mysterious affair with all the skill his “little grey cells” could employ.  To celebrate, Master Mystery Productions is teaming up with one of our favorite clients, Ridge Writers, to create a classic British event in honor of the Queen of Crime.  It’s traditional British summer fete meets murder mystery game show in our theatrical tribute to the Mistress of Mysteries.

After receiving an unexpected inheritance from a deceased aunt, ardent book lover, Miriam Lancaster, decides to take a once-in-a-lifetime trip to England to visit the settings of her favorite novels.  She’s toured the London sites of Charles Dickens and tramped the Yorkshire moors of Wuthering Heights.  Next stop: Essex for The Mysterious Affair at Styles by Agatha Christie.  But no sooner has Miriam stepped onto the train platform in Shayle St. John that the British constabulary are on her heels, accusing her of a robbery.  Then she is swept to a grand country house as the guest of the very woman who accused her of stealing.  A massive fortune, embittered relatives, a troublesome marriage, poetry, patent medicine, and poison only add to Miriam’s adventure as it becomes clear a dangerous presence has taken up residence at Shayle Court.  Inspired by a double dose of British legends in the mystery genre, Ode to Agatha turns country house crime into a British summer fête game show where guests get to grill the suspects, examine the evidence, and solve a brutal murder themselves.

Ode to Agatha marks our 5th collaboration with the Eastern Sierra Branch of the California Writers Club–better known as Ridge Writers–after our successes with Goodbye Hollywood, Hello Out There, Wildflowers for the Funeral, and Pauper’s Grave.  It’s also our third show set in England after July 2016’s The Last Garden Party and September 2016’s Pauper’s Grave.  Our latest mystery seems to blend both of those prior British tales.  We return to a classic English village church, but now it’s a bright summer day and a charming, traditional fete is going on.  Food and games and colorful characters will fill our event honoring Dame Agatha Christie.  And some sinister events may transpire as well.

Ode to Agatha will help us redefine our traditional show styles with an entirely new interactive format for Master Mystery Productions.  Inspired by a British game show, this format will allow the guests to interrogate the suspects themselves, to dramatic and hilarious results.  The suspects will answer questions, be snarky to each other, make innuendos, bicker, and sow the seeds of suspicion among the others.  Now the audience, working in teams to uncover whodunnit, will have more direct contact with the characters of the story, making them feel even more a part of the mystery than ever before.  Whodunnit?  How?  And why?  That’s for you to discover.

A cast comprised of veterans and newcomers will keep the story lively and entertaining as our suspicious suspects swap stories, throw shade, and hint at little…ahem…indiscretions about each other’s pasts.  The result will be a hilarious mix of improv and drama achieved by some of our best talent.  Sharpen your detective skills and start asking those questions.  Where was the second husband at the time of the crime?  What about the former companion’s history with a certain member of the household?  What did the stepdaughter misplace?  Scandal abounds in Ode to Agatha.

Ode to Agatha, the lucky thirteenth Master Mystery Production, is a special one-day celebration on Saturday, July 15, 2017 at 2 p.m. at Ridgecrest Presbyterian Chruch (633 W. Las Flores Ave.).  Tickets are $20 for a single ticket, $30 for two, which includes access to the food, drink, games, and a seat at Ode to Agatha.  Tickets are available at Red Rock Books.

Join us for fun in the summer sun to celebrate the Queen of Crime herself!  Let’s give this remarkable woman a proper…

Tickets go on sale this Saturday at Red Rock Books!  We hope to see you at the show!