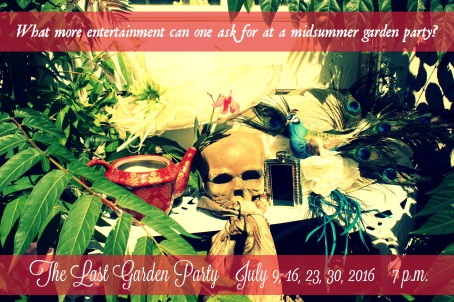 “Who are you people?”  A very important question. In mystery fiction–and especially in a Master Mystery Production–who the characters are mean everything to the story, the crime, and the solution.  So who are the characters in MMP’s latest show, The Last Garden Party?  Who will be the lords and ladies that populate our Victorian garden?  Writer/director, Daniel Stallings, and his cast of talented actors will share with you the backgrounds and their views on their mysterious characters.

PACK OF PUREBREDS: THE MAKING OF THE LAST GARDEN PARTY (Part 3)

Characters are extremely important to good detective fiction.  Not only are they the suspects, but they drive the plot forward and provide emotional touch-points for the audience.  In detective fiction, the personalities of the characters–who they are as people–informs everything from their interpersonal relationships to the crime itself.  Dame Agatha Christie always said that the character of the people was the number one most important factor in any mystery.  It’s a philosophy I have taken to heart with every piece I write.

So here I will let my amazing cast of The Last Garden Party talk about their characters and how they view them, giving our audiences even further insight into what makes these lampooned lords and ladies tick.

Phoebe Walliscroft is the young, American second wife of the absent Lord Walliscroft.  She is the hostess of this last garden party, but her good intentions are hampered by her nutty new relatives.  Devanne Fredette tells us her views on Phoebe and her character:

“Phoebe goes through a lot of changes in a short amount of time.  She accepts the truth more and more as time goes on.  In the beginning, she is very anxious to please her guests.  She wants her husband, George, to be proud of her.  However, since she was not raised in Victorian society, she is quick to get nervous.  I picture Phoebe as a small town American girl that is thrown into a quest for power.  As time passes, she accepts this role of being the odd-person-out and becomes more confident in how she moves and acts, setting the perfect balance between a novice hostess and a decisive detective.“

Paul Walliscroft is Lord Walliscroft’s son from his previous marriage who is, as is the way of these stories, around the same age as his stepmother.  A scholarly man, Paul is the epitome of cool British reserve that scoffs at any “ridiculous fancies” such as the end of the British Empire or a body in the croquet lawn.  Sebastian Lorenz shares his insights about Paul.

“With his monocle securely in place, the character of Paul in The Last Garden Party pays really close attention to detail.  He ponders all the facts he can gather before sharing his scholarly opinions.  Carrying a book with him wherever he goes, it is safe to say that he is an intellectual even though he might brag a little too much about his education.  Paul is also clearly a very sensitive man, having step-mommy issues as well as being lactose intolerant.  Above all else, Paul is very patriotic to his native England.  In his heart lies a good man always searching for truth, justice and the British way.  One can say that the only thing missing from his life is the love of a good woman.“

Lady Elizabeth Margaret Anne Prudence Temperance Charity Bradfordshire-Pierce is the shamelessly stuck-up wife of a socially prominent peer.  She has an extensive, almost encyclopedic knowledge of the British aristocracy, social customs, biting remarks, and the history and genealogy of the Walliscroft family.  Monica Lorenz gives us details about bringing the lady to life.

“While studying the script for The Last Garden Party, it was clear that my character, Lady Elizabeth, schooled herself in the timeless publications of Mrs. Beeton, the original domestic goddess and this alone was enough for me to recognize that her perception of proper etiquette was unsurpassed.  Envisioning her Ladyship carefully observing her surroundings and boldly exuding valuable insight on all things social, I was reminded of a peacock, proudly strutting about with its eye spotted tail on display.  Poignantly, she was equated with this the fearless and iridescent fowl by those close to her and I perceived the symbolism, leaving no doubt in my mind that the peacock was her spirit animal.  Holding such a prestigious rank in English society suggested to me that Lady Elizabeth maintained her proboscis moderately elevated, especially while in the presence of the middle class or anyone else who has been unlucky enough to have earned her disdain.  On the other hand, she sustains an unrivaled passion for good food, fine jewels and for people only of the most proper character.  With only the graceful whip of her fan, Lady Elizabeth can decorously command the respect she unquestionably deserves and bring order to chaos with renowned poise.  Needless to say, I conclude with the declaration that my character’s complexity goes above and beyond her intricate title.“

General Major is an obscure uncle to Lord Walliscroft with an equally obscure military history.  His relatives often mix up “General Major” with “Major General.”  He is an alcoholic shell of his former self who is constantly wandering through a haze and trying to find a way to smuggle booze into the garden party despite the hawk-like scrutiny of Lady Elizabeth.  The General is my character and here are some insights I have on him.

“General Major is the stereotype of a doddering British military officer that so often populated Victorian and Golden Age fiction.  He, at times, seems to be more caricature than character.  His world is a hazy blend of a bygone war, the Victorian garden party, and possibly some other plane of existence we’ll never understand.  He is not a particularly curious man; If he asks questions, most of his answers are found at the bottom of his flask.  His awareness levels are suspect, but he may have seen more than he lets on.  What the General sees, knows, and understands is perhaps one of the most curious (and comedic) mysteries in the play.“

Mia Mallowan is the ward of Lord Walliscroft whom everyone assumes will eventually marry his son, Paul.  Impetuous, brash, and strong-willed, Mia is independent and loves it.  She is a sassy girl who enjoys playing tricks on her relatives.  Celese Sanders tells us all about her character and what makes her tricky brain work.

“My fascination with Mia began the moment I first met her.  Like everyone else who knows her, I was fascinated by her and irritated by her at the same time.  Her cruelty is certainly not lovable, but there is something so unique, and quite intriguing, about her that continually pulls others to her.  She has a finesse about her that is diluted by her selfishness.  She is clever, but that is clouded by her greediness.  She is the round piece in a very square society, and she is not ashamed of that.  Nothing is out of bounds for her.  And to further push the limits, she is a woman who is harshly honest in a culture where facades prevail.”

Our sneaky suspects have been revealed.  But among those present, have you any ideas who could be the killer in this Victorian melodrama?  Find out at The Last Garden Party, opening July 9!

The players have made their entrances.  But what will they wear?  Find out all about the costuming, props, and other dressings that take The Last Garden Party straight to its Victorian fantasy in the final part of our behind-the-scenes series, Fancy Dress: The Making of The Last Garden Party (Part 4).