“I feel like if you had an old pirate’s map of the village of Hamilton Park, this mansion would bear the legend: Here There Be Monsters.”

Ominous words from Nina Nightingale, the caretaker of the abandoned Hamilton House, who is forced to open it up for four friends renting the old, creaky place for their Yuletide celebrations. The perfect setting for an old-fashioned ghost story. But while the set-up may feel familiar to many fans of bumps in the night, our direction with it stems from many diverse sources of inspirations to create a unique tale only Master Mystery Productions can tell. What monsters did we dig up in our research? Writer/director of Woman in the Walls, Daniel Stallings, will pull back the curtain to reveal the inspirations behind our 26th Master Mystery Production in this first beyond-the-veil blog post.

HERE THERE BE MONSTERS: The Making of Woman in the Walls (Part 1) 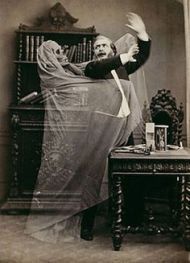 Ghost stories fascinate and frighten us. From the creepy Victorian spectacle of Phantasmagoria to the modern Hollywood blockbuster to the antics of Scooby Doo, ghosts pervade our imaginations and have been explored in many different directions and genres. But MMP had yet to do a traditional ghost story in its canon. The Victorian obsession with spiritualism (and the hoaxes that would invariably defraud people) was poked fun at in our show, The Last Garden Party, in July 2016, but we never explored it in the opposite direction: one with more serious intentions. So I dug up research on Victorian seance and spiritualism practices, which I found carried into the 1920’s and 30’s as parlor games. The idea for the show germinated there. We would have a foot in two different eras–1890 and 1930–and would allow that contrast to add more weight to the plot. 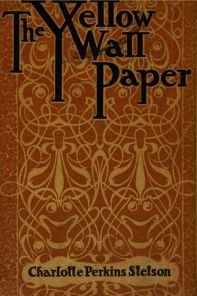 “The Yellow Wallpaper” by Charlotte Perkins Gilman was a key inspiration for the show and has always been one of my favorite stories. An example of Gothic horror, the story revolves around a woman on a typical “rest cure” around the turn of the twentieth century. Her husband has her confined to a room with disturbing yellow wallpaper, and the story chronicles the woman’s descent into madness. Those touchstones of this tale–woman on a rest cure, physician husband showing a lack of insight (as was customary in this era) into female health, post-partum depression, and a descent into madness–formed the backbone of the story of Claire Forsythe, which I then developed into its own beast. I wanted to contrast this era against the backdrop of the 1930’s, which forms the bulk of the show. In this era, women were more liberated. They commanded their own fortunes. They had the right to vote. They were free from corsets and crinolines. The strong, intelligent, liberated women of our 1930’s characters provided the necessary counterpoint to the Victorian Claire and her tragic situation.

Another tale that inspired me was Agatha Christie’s The Sittaford Mystery. Published in 1930 (another inspiration for the date I chose to set the play), the book details a murder mystery during a blizzard where friends receive a message during their table-tipping antics that a neighbor has been murdered. The snowbound setting was provocative, and I’d never written a show set during winter yet. So I combined these ideas of a cast from the 1930’s, trapped in a snowed-in mansion, holding a seance to contact a Victorian spirit…only to face disastrous consequences. Their stories would become deeply entwined, and nothing would be what it appeared to be in this play. 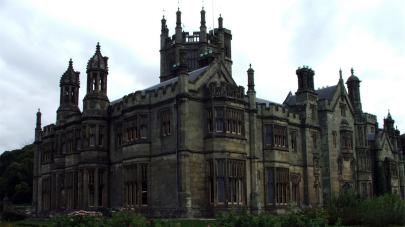 From there, writing the play was easy. Four felt like a strong number for a group of friends renting a country mansion. I set it during Christmas time to give them a reason to rent the old haunted house. I needed an heiress who could bankroll this adventure. She became Lucy. And I wanted to work with less glamorous archetypes than I had in shows past. So Lucy’s friends were more everyday British workers, employed in hat shops and driving lorries. We needed a caretaker who would know the history of the house, an archetype as familiar as the creepy lighthouse keeper warning you to stay off that misty island in the distance. But our caretaker has a few surprises hidden literally up her sleeve. To bring in the seance element, I chose to make the caretaker a professed psychic (“The Gift,” in our story), but to contrast her confidence, I made one of the girls in that group of friends also possess the Gift, a real sensitive who is far too aware of the danger of that old mansion. This made for really fascinating and fun contrasts during the play between rich and poor, sanity and madness, love and hate, genuine and fraud.

I loved getting a chance to play with familiar settings such as the English Countryside and the early twentieth century in new ways with our wintertime setting and less upper class trappings. This cast and crew has taken my spooky take and made it magical with touching performances, gorgeous period costumes, masterful hair and makeup, and superior set design and dressing. For our first ghost story, it’s going to be a legendary tale to fit with our legendary (and allegedly haunted) venue. We can’t wait to share it!

There’s the ghost’s backstory, but who plays the ghost? Our cast will send out some sympathetic vibrations and call to the spirits of their characters to let us know more about what makes them tick in our next beyond-the-veil blog post, Spirited Folk: The Making of Woman in the Walls (Part 2).

And remember your tickets! They are on sale now through the Amargosa Opera House Front Desk. Call them at (760) 852-4441 between 8 a.m. to 8 p.m. daily to reserve your seats. Please reference “Woman in the Walls” when making your purchase. Patrons may also email the Front Desk if there are difficulties reaching them and leave details such as name and phone number, and the front desk staff will call them back. That email is deathvalleyjunction.backstage@gmail.com.  For further questions, contact mastermysteryproductions@hotmail.com or message Master Mystery Productions on Facebook.

We’ll see you at Amargosa Opera House for the show!