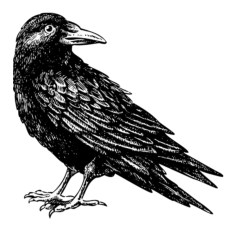 What would Edgar Allan Poe’s “The Raven” be without the Raven? When we decided to adapt the poem for our mysterious stage, we knew we would need to build the titular bird for our performer. A crazy, impossible task, right? Not when you already have one puppet under your belt. With the same critically acclaimed puppet designers from a previous Master Mystery Production, we were able to take what we knew and created a brand new species of theatrical magic. What do a parrot and a raven have in common? They’re both birds of a feather when MMP handles them. Learn how we created our magical puppets below!

BIRDS OF A FEATHER: The Making of Lenore Nevermore (Part 3)

The Raven is not our first Master Mystery Productions puppet, and we doubt that it’ll be our last. But the Raven owes so much to our original bad bird of the stage. The critical darling , audience-adored, and award-winning loudmouth known as Polly the Parrot from Mutiny on the Sea Witch, our pirate’s treasure mystery.

Just like we couldn’t do “The Raven” without one, we didn’t want to do a pirate-themed show without a talking parrot. Now there are many ways to approach this issue. To maintain the scale we wanted for the performers, we opted for a puppet. The puppet would be the correct scale against the other actors. Creating our own was both a challenge and a delight, and we ended up with a true theatrical treasure.

The mechanism behind our birds is relatively simple. We researched these puppets to find the best style for our purposes. And the best for us was the simplest: a hand puppet. The human hand and fingers and wrist can create a multitude of gestures and emotions a static creature can’t. By simply folding the hand, a puppeteer has a whole world of feeling to design for our feathered friends. 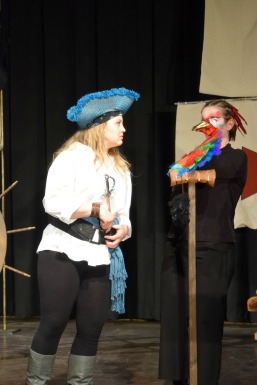 Skeleton Key and two-time Diamond Mask Award winner Janis Kunz, who won her first Diamond Mask for the role of Polly the Parrot, has been our talented creator of bird heads for both birds. For Polly, she fashioned a magnetic beak out of a golden coin purse, creating little finger gloves that could slip over her fingers. The magnets allowed Polly to be “fed ship’s biscuits” onstage, a marvelous effect that delighted our youngest guests. The Raven’s design is a little less interactive, but equally as magnificent. A highly detailed “cap” of sorts was made and covered in slick-back black feathers and a long, pointed beak. A Velcro strap which slips under the hand to be anchored by the palm keeps the head in place and allows for adjustment for different puppeteers. The effect was so good that the director practically squealed with delight when he saw the finished head.

But the big thing everyone waits for are the puppet wings designed to really flap. After all, a bird has to fly. The wings for both puppets were designed and created by Daniel Stallings. The mechanism behind our wings is simple to understand, but required a bit of patience and dexterity (and lots of trial and error) to perfect. We first fit a bracelet to the performers puppet hand. It functioned as a kind of crosspiece to anchor the wings. The wings were made out of flexible, but still stiff enough to hold weight cardstock. We cut them to shape, always being sure to create mirror images for a correct left and right wing, and colored them with the base colors of our bird’s wings. Such as all black for The Raven. 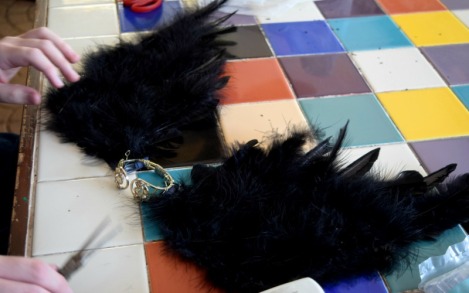 Feathers were then glued to the tops of the wings. Colored ostrich feathers formed the red, green, and teal feathers for the parrot. We had two styles of feathers for The Raven. Long pointed ones to form the edges of the wings, like the real birds, and softer, shorter, fluffier ones to fill out the body of the wings. We had to be very careful of where the feathers lay and what feathers we chose. Feathers with too thick of a shaft couldn’t be used in the center of the wing, because the shaft would keep the wing from bending correctly. The softest, thinnest feathers went in the center to allow for maximum movement, while thicker ones bolstered the top edge of the wing, providing skeleton support so the wing didn’t curl up on itself.

With the wings decorated, we moved on to the two most important pieces of the puppet: the guide hoops and the controlling strings. The guide hoops hold the strings in the correct position on the puppet so the wings perform at their best. To make the wings flap, fishing line is attached to the very tip of a wing. The same line in then attached to the center of the wing. This allows the wings to bend in the center in a more natural flap. The string is then kept loose as it is guided through the hoop that holds it in place and down the front of the puppeteer’s arm. Repeat for the other wing.

Once both strings are attached, the puppet wings have to be fit to the performer. We always leave enough fishing line to do this. We slip the bracelet, now bearing wings, onto the puppeteer’s arm. Now this is the reason why we fit the actor. There’s a point on both strings when pulling them together makes the wings flap together. Our puppeteering motion is a very simple downward push on a central control. Only one hand is needed to make the bird fly. When we find that moment on both strings, we mark the position, cut the strings to a little longer than that desired point (to allow us to tie and affix the strings on the control), and attach both strings to the item we’re using as the actual puppet control. It can be anything. For Polly the Parrot, we used a pirate’s gold coin as the control. For the Raven, we used a simple twig to create a faux perch for her. By simply pressing down on this control, the puppeteer can make our birds soar across the stage. Voila! A finished feathered friend (or fiend)! Truly magical.

But a finished puppet doesn’t mean a finished character. You can’t forget the puppeteer in your designs. We had lots of fun elaborating the character on the performer as well. Our puppeteers wear all black costumes, but we go crazy on the decoration. For Polly the Parrot, Janis Kunz created her own wild and colorful makeup design reminiscent of war paint and parrot feathers, while Abigael Mondragon created this truly epic helm of braided hair and red feathers for Janis, looking like a powerful and pirate-y helmet ready for battle. For the Raven, we designed a plague doctor, which fit so well with our Edgar Allan Poe aesthetic. Plague doctors often were seen with beaked masks, turning them into elegant and foreboding birds. With a mask designed by Lexi Phillips and Janis Kunz and festooned with top hat and feathered cloak, our Raven turned from puppeteer into a menacing presence that haunted our stage and the audience’s hearts. Both are exquisite designs that showed how Master Mystery Productions embraces our creative challenges to produce masterpieces of art. Even if they keep bothering you for a cracker or repeat “Nevermore” in your ear.

Birds of a feather may flock together, but only one bird reigns supreme at Lenore Nevermore. To see our Raven in action, you only have one more chance to see it and this magical, mysterious production. Lenore Nevermore closes at the legendary Amargosa Opera House in Death Valley Junction, CA on Saturday, October 26 at 2 p.m. This will be the last time to see our landmark 25th Master Mystery Production, so call the Amargosa Hotel Front Desk at (760) 852-4441 from 8 a.m. to 8 p.m. daily to reserve your seats. Get them before this show flies away forever!

We can’t wait to see you there.