At Master Mystery Productions, we have often gone over many a quaint and curious volume of forgotten lore to help shape our mysteries into living masterpieces. But until now, we’ve never used an existing work to provide the core–the tell-tale heart, if you will–of our story. While it was daunting to take such a well-known work and adapt it to stage with our own story and characters, the challenge was also thrilling. Writer/director Daniel Stallings will share with your both the blessings and burdens of turning Edgar Allan Poe into a Master Mystery Production.

ONCE UPON A MIDNIGHT DREARY: The Making of Lenore Nevermore (Part 1)

The true genesis for Lenore Nevermore doesn’t begin with Poe at all, but with Charles Dickens. Every year, my writer’s club puts on a Dickens Tea in December, an homage to the Victorian Christmas traditions popularized by one of the most famous authors of the age. This year, I wanted to put on a twist and designed an Edgar Allan Poe Tea. And while the Dickens Tea features a dramatic holiday reading from Dickens or Victorian England (We had a visit from Jacob Marley one year and Queen Victoria another year), I wanted to go the extra mile for Poe. Poe is widely credited as the inventor of the mystery genre, so what better homage to the man who made mystery by turning one of his famous works into an interactive whodunit. 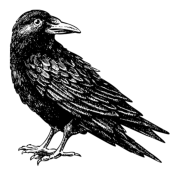 “The Raven” stood out to me, because of its inherent mystery. We know Lenore is dead, but we don’t know how or why. We are not sure why the Raven haunts the narrator. While it had a framework to build from, it also left a lot of questions that I could dream up answers to. If Lenore was murdered, that would certainly haunt the narrator. Could the Raven be there on a mission? For what? The truth? A dim picture started to emerge from the shadows. Lenore dead from a fallen bust of Pallas Athena, often referenced in the poem. The narrator tormented with her memories. Wanting to learn the truth, but also scared about what he might find.

I suppose you could say this MMP show started off with a stronger footing than most. The parameters were already in place with my inspiration being “The Raven.” I started right from the poem, reading and rereading it to get a feel for what characters were there. Lenore, of course. The narrator. The Raven. Three characters is a bit light to base a mystery on, so I knew I would need to plump up the text a bit to find suspects. But I wanted to maintain the essential intimacy of the poem. I didn’t want a huge array of suspects. I wanted to keep it to a tight triangle. Three people who could have done it, and it was all about finding the right combination of clues to show the truth. The mystery became a psychological game, as it were. And that made the challenge so rewarding as a writer.

I had Lenore and the Raven settled from the poem. I named the narrator Auguste Dupin in an homage to Poe’s fictional sleuth from his (and the world’s) first detective story, “The Murders in the Rue Morgue.” I set the tale on outskirts of Paris, another Rue Morgue homage. But I needed at least two more characters to round out the script. A rival would be great. Someone to challenge Dupin for Lenore, creating two impassioned duelers. I named him Guy de Vere, which I took from the name of the fiancé in Poe’s poem, “Lenore.” All comes full circle, doesn’t it? For a final character, I decided to amp up the supernatural and bring to life the statue of Athena in “The Raven.” As the goddess of wisdom, she would be a natural as our sleuth/guide through the madness and mysteries on Dupin’s living memories.

Of all the things I wanted to get right, the tone was the biggest thing. Poe isn’t schmaltzy. He isn’t saccharine. He isn’t silly. I wanted to get this powerful psychological impact just right. This tension between fact and what we chose to remember. Of embracing and rejecting the truth. A story about the unreliability of memory. And I wanted to inject some of that classic Poe-esque terror and drama into the story. With living statues, haunting ravens, and vivid hallucinations, I knew I could have a lot of fun writing this script. I put forth a lot of my own ideas, playing with concepts such as the impossible pursuit of perfection, savior instincts, jealousy, emotional abuse, and so much more. Lenore Nevermore is perhaps one of the most deeply layered pieces I have written for Master Mystery Productions. A small script, but a powerhouse.

With these in place, I let the pen fly, and the story just seemed to form naturally. Of course, I think I had some help along the way. Don’t you think so, Edgar? 😉

A powerful story needs a powerful cast of characters. Stay tuned to learn more about the sinister statues and suspects in our next behind-the-scenes post, Malicious Memories: The Making of Lenore Nevermore (Part 2)!

Don’t forget your tickets to this magical production! The Ridgecrest show opens October 19 at 2 p.m. at Ridgecrest Presbyterian Church with tickets sold at Red Rock Books and at the door. The Amargosa Opera House show opens October 26 at 2 p.m. at Amargosa Opera House in Death Valley Junction, CA with tickets sold through the Amargosa Hotel Front Desk. Call (760) 852-4441 to reserve your seats. Tickets for both shows are $20 general admission, $10 for kids 12 and under.

We’ll see you there!