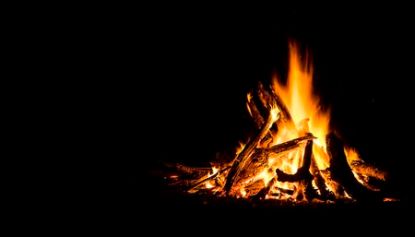 Stories around the campfire is something almost everyone is familiar with, and the served as Monica Lorenz-Dwyer’s jumping off point for designing Close Encounters of the Hairy Kind. But stories and s’mores wasn’t the end of this concept. We had to turn an interior space into an outdoor campground and give the whole show an atmosphere of drama, mystery, and suspense. So we’re doing something brave and a bit crazy. It’s lights out at MMP as we endeavor to shed some new light on our 24th Master Mystery Production. Let’s learn more about the unique lighting in Close Encounters of the Hairy Kind.

LIGHTS OUT: The Making of Close Encounters of the Hairy Kind (Part 3)

Note for actors. Always be nice to your lighting techs. Without them, it would be very hard to see the show! A smart lighting design enhances the mood of a show and creates some very important visual cues about time of day, season, and underlying emotions of a scene. All in ways that you might be scarcely aware of in the audience. It’s very rare for a show to decide to strip away the lighting and leave it to unconventional sources to brighten the actors’ faces. But when has MMP ever been conventional?

Lighting Designer and Technical Director Daniel Stallings decided on a bold and unusual design for the show lighting. Reading the script written by Monica Lorenz-Dwyer, he noticed there were lots of references to characters walking around with lanterns and flashlights and the large campfire in the center of the stage. An idea emerged that he would turn off all the main lights in the venue and let the show be lit only with the “campfire,” camping lanterns, and flashlights used by the characters. It has never been done at MMP to have a “lights out” production, which opens up some creative challenges for our artists to undertake.

For instance, we had to make sure enough light made it on our performers, so the audience could see them. Judicious lantern and campfire placement was important. We spaced several lit lanterns around the campfire circle to make sure they could be seen. Another detail was instructing our actors on proper light handling. We didn’t want them shining flashlights into audience member eyes. For one scene, the actors divide into pairs to search the woods. We ensured each pair had the right lighting combination of flashlights and lanterns to light their little vignettes without sacrificing atmosphere. A major concern for us was not to have too much light either. We still wanted a few spots of shadow to create that atmosphere of suspense and suspicion requisite for any mystery. And for those who might be nervous, all exit signs will remain lit throughout the show.

Most of our lights in the form of flashlights and lanterns were donated to the show by performers and crew members. But the trickiest light of them all was our homemade “campfire.” There was no way we were building a real fire in our venue. We had to create an electric one we could control while also trying to build enough light to shine on the show.

Christmas lights to the rescue! We started with an old washtub donated by the director herself. The tub had often be used for campfires, and we kept the raw, rustic look of it to add realism and weight to the look of the show. We took two strands of C9 lights–one fitted with orange bulbs, the other with white–and filled the bottom of the tub. Then we added some remote control twinkle lights that we could set to a specific flickering to add extra realism to the “fire.” A rope light at the rim added extra light to help illuminate the venue more while a final dash of small orange lights enhanced the color. The mix of orange and white lights created the varied colors found in real fire. And the branches and twigs added to our “fire” will cast atmospheric shadows on the venue ceiling, making the whole room feel like it’s under a canopy of trees.

It may be a lot of work and thought and lots and lots of testing, but it’s worth it to create a one-of-a-kind atmosphere and a truly unique design for a show as special as Close Encounters of the Hairy Kind. And keep your eyes peeled. You never know what mysterious people…or creatures…you might see in the flickering campfire light or thin flashlight beams.

Campfires, lanterns, and flashlights, oh my! While we’re keeping the lights low, you still need a set to light and for actors to interact with. Creating an indoor campsite is no simple feat, so come join us for the next step in our behind-the-Bigfoot blog series to learn more about the set design in Into the Woods: The Making of Close Encounters of the Hairy Kind (Part 4)!

Don’t forget your tickets to the show! We look forward to seeing you there.