Board games are perfect for bringing people together to have fun. And what could be more fun than being able to shrink down and play a larger-then-life version of your favorite game. That was the leading spirit behind our month-long run of our devilishly devious murder mystery board game. We took a classic, twisted to make it our own, and brought it to life one eventful summer. All’s fair in love and board games when we brought out Foul Play for Summer 2019. 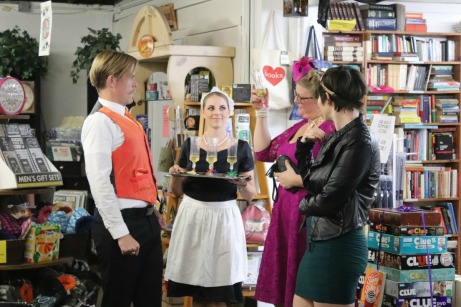 Inspired by our favorite board game of all time, CLUE from Parker Brothers, we transformed our local bookstore into a multi-faceted game board with moving meeples (our actors and audience), larger than life game cards, a life-sized spinner for extra help, and tasty themed treats. With the store revamped with a festive scenic design by Skeleton Key and Diamond Mask Winner Janis Kunz featuring giant playing cards, big dice, over-sized chess pieces, and colorful footprints leading the way, Red Rock Books became the biggest board game ever, a great stage for our talented performers.

Seven complete strangers (along with three devious members of the wait staff) have gathered at an exclusive party held by an enigmatic host known only as King. But his chessman pseudonym isn’t the only strange thing about him. He’s also very interested in their pasts…and some disquieting deaths that happened. Arming his guests with suspicious “party favors” that are reminders of their deadly pasts, King has set up an intriguing situation. Because for some, the threat of blackmail seems to be a deterrent…but for others, it’s a catalyst. When someone put the King in check, this game of cat-and-mouse becomes decidedly more deadly. Was it Sonny Goldstein in the Classics section with the Belt? Or Heather Violette in the Cookbooks with the Poisoned Chocolates? Or what about Dahlia Rosewood in the Mystery aisle with the Corkscrew? Whodunit? Where? With what? And why? That was what our intrepid audiences had to solve.

Audiences had a chance to explore all over the store to find the clues they needed to solve the crime. First, they got to witness the scenes that led to the murder and get a feel for our spectrum of suspects. Then they got to move around the store to different “stations” to interview the suspects themselves. Another station was our giant spinner which let guests press their luck to try and win bonus clues to help solve the mystery. But wait! Halfway through the show, strange developments were made in the case, leading to some shocking twists. After that, the guests had free run of the used book aisles to search for our carefully hidden game cards to help eliminate the options on the suspects, locations, and weapons sheet in their show programs. The guests were able to narrow it down to whodunit, where, and with what. But a motive should never be discounted in any murder mystery. Those who were able to suss out “why” took home the crown as the night’s victors. And with two different solutions, audience members could return a second time to see if they could do it again!

But at a Master Mystery Production, you can always expect a few twists and turns. Halfway through the game, strange new developments emerged in the case. What happened to the butler (a question everyone was dying to know the answer to)? What did they find on King’s body? Is blackmail really what he wanted? Who is the real King? With two different solutions, we divided the cast in half and had them present two differing scenes that altered the game and narrowed the possibilities down to the solution we chose for that night.

Foul Play perfectly blended the worlds of traditional stagework with an interactive murder mystery presentation that provided guests with a totally unique show. No one had ever seen a show quite like Foul Play before, and the innovations and inspirations from our cast and crew really made this production shine and sparkle. Bravo!

And audiences? They loved it! They had so much fun at our completely unconventional production from our CLUE inspirations to the actors’ performances. Press lauded it as “terrifically entertaining,” “engrossing,” “charming,” “uniformly excellent and frequently hilarious,” and much more. One critic said she thought Foul Play had one of our best casts yet. High praise indeed. Well done, everyone!

Read the full review from The Daily Independent.

Read the full review from The News Review.

You may be curious as to why some reviews called the show “therapeutic” and “cathartic.” On July 4 and 5, Ridgecrest and Trona were rocked by the largest earthquakes California had felt in the past 20 years. The quakes caused a lot of damage to property and to people’s spirits. Master Mystery Productions, based in Ridgecrest, was very blessed to have escaped damage, but there was no doubt that all of our actors and crew members were shaken by the crisis. For a few moments, we weren’t sure if we would have a show to present, if we would be able to push forward. But the theatre motto is “The show must go on.” So we did. MMP had many volunteers as Red Rock Books to help clean up after the quakes. We continued rehearsals as planned, and our actors returned. And they gave a rehearsal full of power and presence. A show in and of itself, proving the magic and healing power of great theatre. We are so proud of this cast and crew for pulling together as a family during the crisis to bring a shaken community their talent, their art, and the joy of performance.  We were able to share our sense of community to these people who needed some light and joy after all that happened. We gave them a great show to be happy. And that is one of the best things about this experience. Hugs all around!

Closing night is a time for more celebrations, because it was time for our production awards! First up was The Skeleton Key Award for Service Above and Beyond, our oldest award. Each designed to uniquely reflect the show it was made for, the Skeleton Key Award is a symbol of an individual putting their heart and soul into a Master Mystery Production, going above and beyond their assigned jobs in the show to make it the best it can be. They are inspirations to us in the company, and they remain celebrated in our programs and on our website for years to come. It was with extreme gratitude and pride that we presented Foul Play‘s Skeleton Key to a member of the production who had long been an ensemble member of the company, but had been empowered this show to really take command and go the extra mile to create great theatre, working on everything from hair, makeup, jewelry, costume, acting, and even as a rehearsal stand-in. We are so proud of what she accomplished. Congratulations to Tiffany Cheney on your Skeleton Key Award for Foul Play!

Following the Skeleton Key, we presented the coveted Diamond Mask Awards for Excellence in Performance. Voted by audiences, guests select their nominees for the award based on the performances they liked best. The actors with the most votes win. On their first win, they receive a special diamond pin and subsequent wins will receive a diamond chain to create a cascade of diamonds. Three performers took home the prize for Foul Play. Congratulations to Cat Kreidt, Calvin Johnson, and Felicity Browne on your Diamond Mask-winning performances!

But what’s this? Another award? That’s right. Not presented since September 2015, the Partners in Crime Award honors those who make significant contributions to the writing of a Master Mystery Production. Without them, someone of our Master Mystery Productions would never see the light of day. And for Foul Play, we wouldn’t have been able to construct out complex double solution and board game atmosphere without her. A geek blogger who operates her blog, A Geek Girl’s Guide, this talented lady (who graduated with a Master’s degree on closing night) has a wealth of experience when it comes to board and tabletop games, as they are one of her passions. Plus CLUE is a favorite game of hers. Congratulations Michelle Stallings for winning the Partners in Crime Award for Foul Play!

Foul Play was fun, carefree, fantastic show that helped bring together veteran performers and new stars, traditional theatre with unconventional interactive entertainment, and a shaken community in numerous positive ways. We had so much fun exploring and inventing these characters and this show, and we are beyond proud of how our cast and crew really rose to the occasion. Sometimes, a simple board game can unlock many magical (and mysterious) moments. Bravo, everyone!

Missed a chance to play our game? Well, there’s another show coming out of the shadows soon. Get immersed in a campfire tale unlike any other as writer/director Monica Lorenz-Dwyer spins a yarn about a legendary creature known to leave his sizable mark on the East Sierra in our 24th Master Mystery Production. But stay alert, because you all don’t want to miss your own…

CLOSE ENCOUNTERS OF THE HAIRY KIND

Monica’s show opens this September 27 and 28 at Ridgecrest Presbyterian Church at 7:30 p.m. as part of Ridge Writers’ Weird Weekend 2019. Come join us for a night of tall tales around the campfire…and an encounter you will never forget.

We look forward to seeing you there!