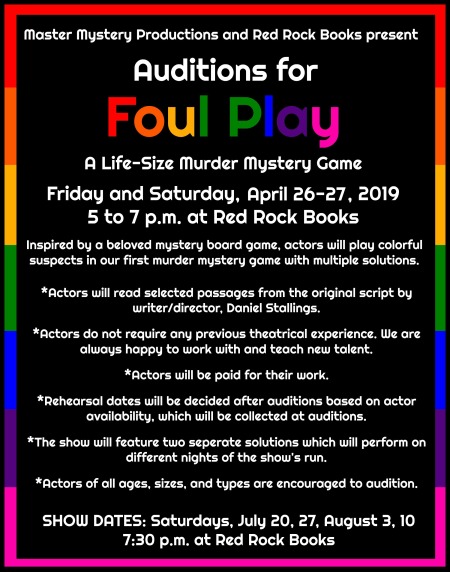 The future looks colorful as we get ready to start our 23rd Master Mystery Production, a fiendish little game we call Foul Play. Like a board game rendered in life-sized proportions, we’re going to need people–or should we say meeples?–to fill our cast of colorful criminals.

Foul Play, our life-size murder mystery game, is our third partnership with Red Rock Books after 2017’s Anonymous and 2018’s Famous Last Words. Structured like a living board game inspired by a mystery classic, the guests will have the chance to search our favorite bookstore for clues, interrogate suspects, and to solve a mystery where anyone could have done it. Because this will be our first Master Mystery production with TWO different solutions, each of which will play on different nights of the show. With suspects every shade of the spectrum and sinister secrets, it it one of our most unique scripts yet. Our script calls for five females and two males.

Actors need to be age 15 and older to audition. Those under 18 will need a parent/guardian signature on a permission slip AND a parent/guardian MUST attend any and all rehearsals their child attends. Actors will be paid for their work. We will work to coordinate transportation for everyone. The show performs July 20, July 27, August 3, August 10 at 7:30 p.m. at Red Rock Books.

During auditions, everyone will fill out an audition form which will ask for basics such as name, email, experience, availability, etc. These are just basics to give us an understanding on who the performer is as well as contact information. Then we pair up performers for cold readings of selected scenes from the original script by Daniel Stallings. Rehearsal schedule will be finalized after auditions based on actor availability. After auditions, casting emails will be sent out to actors.

If you are unable to attend the posted audition dates, but are still interested in trying out, message us on Facebook or email us at mastermysteryproductions@hotmail.com to schedule an outside audition.

It was like a game of chess. Seven complete strangers have been invited to a unique costume party hosted by a man they know only as King. King stage-managed everything, even down to sending his special guests their costumes in advance…along with a chilling note making the invitation impossible to resist. Because each guest hides a lethal secret they thought was long dead. While the suspects try to check the King, each realize they are a pawn in a grander scheme and one wrong move could prove fatal. More than one colorful character will fall in this life-sized board game mystery where you, the player, will make the choices that decide how the game plays out. Will you finesse the King or try to keep him in check? Will you be able to spare a life? Whodunit? How? Why? Where? And with what? Join us for this killer costume party and see how the cards land for you. Because in this sinister game of foul play, someone isn’t playing fair…

DR. JASPER REDMOND — A dry, dusty scholar who believes academic brilliance has a price far above rubies, it seems incredible that Dr. Redmond has any blood in him at all. His fiery lectures on psychology dispel those myths. When he’s not navigating the red tape of academia, he pursues more dangerous and red-blooded endeavors which he keeps firmly hidden from others. King’s invitation to the cool-headed lecturer may seem like a red-letter day, but Dr. Redmond is no fool. Is this party just a red herring? Or is he about to be caught red-handed?

HEATHER VIOLETTE — A classical violinist, Heather’s music is her pride and joy, and she often waxes eloquent—to the point of purple prose—about her musical accomplishments. Regal in her bearing and an absolute monarch in her demeanor, Heather is no shrinking violet and has caused many a conductor to go purple with rage. But don’t present her with a rival if you don’t want to end up black and blue. It’s a hint of a musical rival that draws the vain Heather to King’s party, and, if he’s not careful, King will be in for a major case of sour grapes.

IVY GREENWAY — The sweet, seemingly innocent young ingénue may look as fresh as a spring bud, but Ivy’s a bit of a greenhorn when it comes to the long con she wants to play. She’s had her fun finding generous “uncles” to lavish her with greenbacks and crying crocodile tears when they pass away. Has this little con artist grown jaded from experience? King’s invite certainly tests her resilience, because Ivy suspects she may be able to make a mint off him. Make no mistake, her eyes are always on the green.

IRIS ROYALE — A leading lady without peer, the legendary Iris is a film star whose silver screen history is a shade bluer than many of her fans realize. After retiring from Hollywood, she slipped into the inky shadows as a recluse, and, once in a blue moon, she emerges for her adoring fans. Some say she’s been battling the storm clouds of depression and may never see clear skies again. Will King’s mysterious invitation help her shake off a serious case of the blues?

RUSSELL “RUSTY” CLEMENTINE — Good ol’ Russell Clementine—Rusty, to his friends and neighbors—is a charming lawyer from the Deep South with just a touch of a dandy about him. Don’t let the accent as smooth and sweet as caramel fool you. Rusty is a tiger in the courtroom with an acidic tongue and a mind like a razor. He may joke in polite company that his legal skills are a bit rusty, but he hasn’t lost a case yet. A slight quibble at his latest trial has soured his taste for Southern law, so when King dangles the carrot of a party invitation, Russell is the first to squeeze the orange of this intriguing opportunity.

AURORA GOLD — On the outside, this super-wealthy mogul of a media empire is a ray of sunshine with a heart of gold, but remember that all that glistens be not gold. Aurora didn’t get rich by being yellow-bellied, that’s for sure. Her detractors have called her “vicious,” “unscrupulous,” and “downright evil” in her business practices, but that never stops Aurora from buttering up her investors with promises as sweet as honey. While King’s invitation makes her suspicious, she catches a whiff of big money involved and would hate to miss such a golden opportunity.

DAHLIA ROSEWOOD — Sexy, sassy, and smart, Dahlia is a romance novelist whose real life affairs are usually glimpsed through rose-colored glasses. Rumor says she’s tickled pink about being a certain politician’s mistress, but there’s something rotten in her bed of roses. She may be getting her pink slip any day now. Not that any scandal would dim Dahlia’s rosy outlook on life. Drama, scandal, and shocking behavior are all in a day’s work for her, and her rambunctious past would be enough to make anyone blush.

Foul Play will be a crazy, colorful, and complex adventure that will rank among some of our most unique shows in our history. We welcome anyone who is interested to audition! No theatrical experience is necessary. We are happy to take and develop new talent all the time. If you have questions or concerns or want to schedule a private audition, email us at mastermysteryproductions@hotmail.com or message Master Mystery Productions of Facebook.

We’ll see you at auditions!