When you do a show set in 18th century Versailles, you know the costumes are going to extreme. Larger than life hips. Towering powdered poufs. Jewels substantial. 18th Century Versailles at the heart of the French court was rather…excessive with the fabric frosting on their frocks. Bows, ribbons, trim, jewels, sequins, ruffles, lace…and the list goes on. It was like a parade of multi-tiered pastry monstrosities toddling about. And that’s the effect we had to reproduce in our murder mystery farce, Eat Cake. Keep on reading to learn how we created these exquisite costume confections.

AN EXCESS OF FROSTING: The Making of Eat Cake (Part 3)

Costuming is a bit like baking. Follow us on this. Before you can add any of the icing and decoration, you need to start with the basics. First, you have to select the cake you want for a costume–finding the patterns, doing research, taking measurements, understanding the era. For us, we researched 18th century dressing in terms of silhouette, color choices, fabric selection, etc. We re-purposed costume patterns that aren’t traditional 18th century, such as a fairy godmother dress, to create the aristocratic gowns. Then you need the right ingredients: fabrics and trims. Then you need to mix everything properly and bake–cut and sew the costume. You have to remember to add support to your cake to stack it. In our case, this was the proper undergarments. When everything is baked, stacked, and ready, then we frost with trims and ice in jewels. The perfect pastry of a 18th century costume!

Eat Cake is perhaps the most haute couture show Master Mystery Productions has EVER created. The principals and metiers of haute couture fashion found origins within Versailles, particularly with Marie Antoinette’s personal milliner and dressmaker, Rose Bertin. She is widely considered the first famous French fashion designer, was called the “Minister of Fashion” by enemies of the Ancien Regime, and helped bring the idea of couture to the forefront of popular culture. Our legendary Costume Designer, Skeleton Key Winner Margit Stallings, whose period costuming on shows such as Goodbye Hollywood, The Last Garden Party, Bury Me in Paris, What Happens at Sundown, and Mutiny on the Sea Witch, has earned her critical praise and the admiration of artists and audiences everywhere, had to step into the role of the first couturiers to design these costumes.

Haute couture is signified by hand-finishing, fine construction, and items made to measure for a person’s body. It’s about unique, one of a kind, and luxurious pieces. The costumes we design and construct for specific actors and characters are already some of our most made-to-measure. But for Eat Cake, the dial was turned to eleven.

Take the gown for Madame la Comtesse. The largest dress in the show, the actress has to wear four separate pieces to create the look. This is actually simplified from traditional 18th century dressing of shift, stockings, garters, dickie petticoat, stays, pocket bags, hip pads, under petticoats, fichu, stomacher, gown petticoat, and finally the gown. We simplified these looks to make it easier for theatrical dressing. First, a large pannier is worn. Over that we placed an intricate under-skirt, taken from the costume of Lady Elizabeth in The Last Garden Party and hand-embellished to coordinate with the new gown, which mimics the showy gown petticoat used for display in traditional dress. The bodice gives the effect of both the top of a gown and the stomacher all in one. Finally, an over-skirt is added to replicated the open, bottom skirt of the gown proper. The entire ensemble is hand-decorated in lace trims, ruffles, and flounces. We used a selection of gold embroidered and white-and-gold brocade fabric to create the gown to showcase the wearer’s wealth. The bodice was assembled with a hand-sewn basting stitch to help it fit to the actress precisely. It’s truly made-to-measure couture.

One of the key garments we needed for the show wasn’t even a dress or waistcoat. It was, in effect, underwear. We all know the hip shape of the late-1700’s. It was the defining silhouette of Versailles in that era, and we couldn’t do a show set just before the French Revolution without having the over-sized hips and voluminous skirts. To get that effect, panniers (“pocket hoops”) or hip pads were worn. We have two distinct styles. Madame la Comtesse wears the large pannier made with boning. This helps it hold larger shapes. The other ladies will wear simpler hip pads–almost a pair of small pillows tied to waist with ribbon. These kinds of hip pads were growing popular in the late-18th century. While we bought the large pannier, the soft hip pads were entirely sewn by hand. No machine stitching.

Even costume pieces we sourced, bought, or pulled from archive were given the haute couture touch. A coat worn by the revolutionary Henry was first made for Exit Prima Donna, but we have since spruced it up with lining and hand-sewn buttons and top stitching. Brigitte’s jacket, seen above, was designed to be a overflowing confection of pinks. Satin bows were handmade, each affixed with a pink jewel, and sewn all over the jacket. Ruffles and lace were added to the hem, collar, lapel, and sleeve cuffs of the jacket. Our brave Costume Designer has also made the choice that not a single dress would contain modern fastenings. No zippers here. The garments will see buttons, bows, and ribbon closures instead.

But don’t think that’s all we have in terms of costume pieces. Custom, handmade hats and hairpieces, along with elaborate wigs, will crown each look. From the elaborate poufs of Marie Antoinette and Lady Chantilly to the pearls woven in Madame la Comtesse’s coiffure to the lace cap of the maid Marianne to Henri’s rebel colors, each character is injected with their own style from dress-coordinating hair bows to the handmade buckles on the Marquis Mauvais’ shoes. 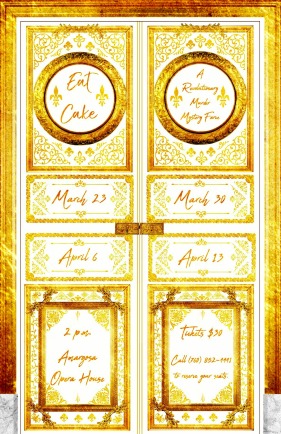 All in all, MILES of textiles, trims, fabrics, and fancies were used to engineer these fashions. Crafting the costumes was almost a production by itself. While the debate may rage on on whether fashion is an art form, we think we can all agree that the costuming of Eat Cake is a masterpiece. Each garment is a work of art. Mega kudos to our Costume Designer for all her hard work! Each cloth confection looks good enough to eat!

We may have baked our fashion cakes, but there’s still the icing to put on top. And we mean jewelry. Learn all about the jewelry selections and the specialty props our crew has assembled for the show to make the stage sparkle like Versailles in our next behind-the-scenes post–Icing on the Cake: The Making of Eat Cake (Part 4).

We look forward to seeing you at the show! Tickets still on sale at the Amargosa Hotel Front Desk. Call (760) 852-4441 to reserve your seat.