Whether it be Master Quick’s line “We’re not exactly honest folk” or Cutlass Kate’s “We’re all thieves,” it’s no surprise that pirates were the scourge of the seas. And yet, even pirates had pasts and personalities. Being a buccaneer was more than just peg legs, eye patches, and an “argh” for good measure. Our cast has taken steps to create distinct personalities for their personal scallywag, and it’s here where we let them talk about what makes their pirate character tick.

NOT EXACTLY HONEST FOLK: The Making of Mutiny on the Sea Witch (Part 2) 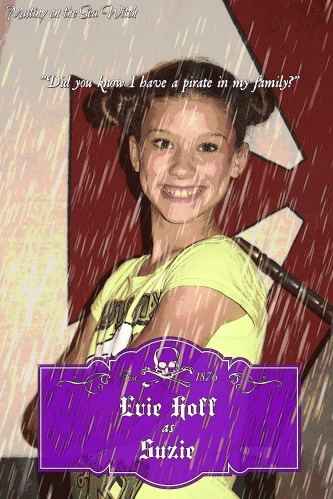 Filled with imagination and a sense of dramatic effect, Suzie is a young girl, age 10, who loves to tell stories to her friends in the grandest way possible.  She is distantly related to Cutlass Kate…or so her late father has told her.  Suzie is warm, generous, playful, creative, and fiercely independent, and it is through her imagination we hear this tale. Evie Hoff takes on her first major role as Suzie and tells us her tale on what makes Suzie special:

“I think Suzie is really just a big dreamer. She’s very friendly and generous. She tells jokes and cool stories. She also tells about her dreams. She’s a helpful daughter, yet a little wild and a little crazy. If she goes on a trip, she is sure to tell every little detail. She is nice and relatively calm. She likes playing outside, and she doesn’t really care about what she looks like. She could be described as a mismatched person.”

Captain Kate Landless is captain of the notorious Sea Witch, a pirate ship that was the scourge of the Spanish Main in the 18th century, earning her the moniker “Cutlass Kate.”  Also nicknamed “The Mad Maiden,” “The Pirate Queen,” and “The Siren of the Spanish Main,” Cutlass Kate is a formidable pirate who uses trickery and cunning instead of brute force to secure her plunder.  Intelligent, cultured, and well-spoken, she is a brave and capable captain who also keeps things private from her crew.  She is not very open with her life prior to piracy.  She has devoted much of her piratical career to finding the fabled Loot of a Thousand Ports. MMP veteran and Skeleton Key Winner (The Silent City), Devanne Fredette, makes this her landmark eighth show with us as she details her views on the notorious Cutlass Kate:

“When it comes to Cutlass Kate and bringing her character together, there is this sense of freedom she brings to the table. Not only as Kate herself, but how I imagined her to be in comparison to the original script. I feel that Kate is an idol of the boundless journey and adventure. As such, when developing Kate, it was important to look at Suzie in relation to Kate to get the most out of this characterization. Developing Kate’s personality was actually really fun. She is full of pride, but doesn’t let that get in the way of justice or finding treasure. At the same time, she is strategic which can be mistaken as weakness or insanity when looking for the Loot of a Thousand Ports. Mutiny comes as a big surprise as she trusts in her crew to trust in her in return. She rejects the thought. As such, she mistakenly dismisses come major concerns of her crew. In conclusion, Kate was very refreshing to perform. She is very energetic, but this helps her stand out from her crew.”

First Mate Quick is Cutlass Kate’s right-hand woman on the Sea Witch.  Ambitious, driven, even career-minded as far as piracy is concerned, she is loyal…to whoever would provide her with the best advantage.  Quick is sharp-tongued, sharp on discipline, and a fierce devotee of the Code of Conduct. However, Quick doesn’t underestimate Kate’s prowess as a pirate. MMP newcomer Violette Hoff joins us in the role of First Mate Quick and shares her thoughts on the character:

“With a sometimes fluctuating composure, consequent of her low tolerance for foolishness, First Mate Master Quick can be described as a no-nonsense, bluntly honest pirate. Very possible the most put-together pirate on the ship, Quick is persuasive and overall respected by her crewmates. She is the great influencer of most of the emotional drama of the play. Easily annoyed and slow to forgive, Quick is an intriguing character that doesn’t get her true personality fully displayed until the latter half of the play.”

Quartermaster Joyce is responsible for dividing any loot captured for the Sea Witch.  Materialistic and greedy, Joyce is always keeping her eye on the bottom line and believe the measure of someone’s worth is in their wealth.  Having gotten into piracy merely for the plunder, she is unconcerned with the feelings of others and only wants to fatten her purse. Cosette Hoff makes her MMP debut in this role, and she provides her insight into Joyce’s character:

“Quartermaster Joyce is a very greedy pirate. Only joining piracy for the money, Joyce doesn’t really care about anyone, especially Pierce. Always wanting to fatten her purse, she is one of the ones helping fan the of mutiny, hoping to get the lion’s share of the treasure.” 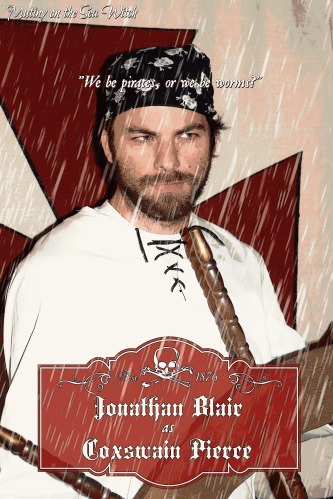 Coxswain Pierce is the one who pilots the ship.  Temperamental, easy to anger, always ready to fight, Pierce is a brilliant navigator but a bad negotiator.  At the first possible hint of accusations, Pierce is usually the loudest voice rallying the crew against it.  He is the rabble-rouser. Jonathan Blair debuts in this role for MMP, and he provides his take on what makes Master Pierce who he is.

“PIERCE–the Man, the Character, the Legend: Pierce is a man with a code. There’s a lot he and I share in common. Like myself, Pierce tolerates no action that he perceives as cowardice. He has no respect for weaklings. Pierce follows his code and expects everyone around him to follow it as well, especially the captain. He is an honorable thief and a scruffy, rugged scoundrel. Furthermore, Pierce is brave; He is not afraid to challenge Kate’s authority when he feels she is in the wrong. He can put down most men with a single glare in their direction. You don’t want to get on Pierce’s bad side lest you wish to face his fierce hurricane of a temper. Pierce stands up and fights for what he believes in, and he can raise the rabble to do the same. Like any pirate, Pierce is motivated by treasure. Pierce strives to be the best, hence why he is, if not the best, one of the most brilliant navigators in the Caribbean.”

Moll Flint is the chief gunner on the Sea Witch who handles the weaponry on the ship and perhaps the only one who remains loyal to Kate throughout.  She is a tough, hard-as-ship’s-biscuits, no-nonsense counterpoint to Kate’s more graceful command.  She doesn’t have the greatest patience or coolest head, but she is fervently loyal to her captain ship.  She is a skilled markswoman and swordswoman who has no issues holding her own in a fight.  Even so, Moll has reservations when it comes to Kate’s dream of The Loot of a Thousand Ports. Brilliant actress, Skeleton Key Winner (Bury Me in Paris), and Diamond Mask Winner (Donatella Violetta, Exit Prima Donna) Heather McGaha returns for her fourth MMP show as Moll Flint and shares her thoughts on this one-of-a-kind woman:

“Despite her reservations towards Kate’s far-fetched dreams, chief gunner Moll Flint stays fiercely loyal to her captain. She is a hot-headed pirate who is always ready for a fight. Moll is far more comfortable letting her sword speak rather than using her words. Between putting up with Polly’s incessant squawking and the rest of the crew’s shenanigans, her patience is running quite thin after twelve long years at sea.”

Ship cook aboard the Sea Witch, Jaq is just in it for the adventure and thrill of being on the ocean.  Jaq has blank loyalties; He will serve whoever is in charge.  Jaq is not much of a fighter nor the sharpest sword in the scabbard and prefers the safety of the galley over the tension on deck.  Everyone generally likes him, mostly because Jaq is the best cook on the Seven Seas.  Jaq is particularly friendly with Polly the Parrot, who often keeps him company in hopes of getting a snack. Young Kenny Hoff makes his MMP debut in role of Jaq the Sea Cook and proves a backstory on Jaq’s pirate origins:

“Jaq is a good cook; He makes good food. Jaq likes his mom’s biscuits. His mom was a British cook, and Jaq was kidnapped at age seven, but he was already a master cook. He was a slave in South America, but he was a rebellious slave and would play with Polly the Parrot on his free time. When they gave Polly to Cutlass Kate, he sneaked on board and promised to be the cook after showing Kate how good his food was.” 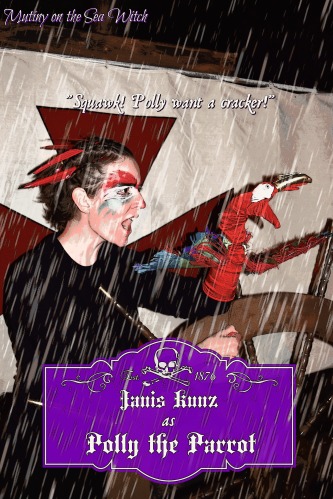 Polly is Captain Kate’s talking pet parrot.  Given to Kate as a “gift” (bribe) from a South American port who asked not to be attacked and plundered, Polly is her companion on ship, and Kate is very fond of the bird.  Polly enjoys full reign of the ship and is a curious bird who likes to stick her beak into unwanted places.  Squawking on the action in her typical parrot fashion, she is a source of comic relief and bright color in the show. Janis Kunz, MMP fan turned actress, will be making her stage debut as both puppeteer and voice of our talking parrot, here she tells us more about Polly:

“Polly the Parrot has flown the high seas with many a nefarious pirate captain. She’s changed hands several times before she landed her current home aboard Cutlass Kate’s treasure-seeking pirate ship. There, she enjoys her perch at Kate’s right arm. When she’s not devouring Jaq’s tasty sea biscuits, she’s readying her feathers for her favorite pastime–a rowdy swashbuckle amid ruthless pirates! I want to ring Polly to life as an animated, so-annoying-the-audience-loves-to-hate-her,playful kind of character. She’s been a joy to play and help create.”

You’ve met our crew of scallywags, buccaneers, and swashbucklers. But even the most reckless pirate needs a ship to sail the Seven Seas. Find out all about how we created the deck of the Sea Witch complete with sails, Jolly Rogers, captain’s quarter’s and more in Shiver Me Timbers: The Making of Mutiny on the Sea Witch (Part 3).

Have a Happy Halloween and be sure to join us for the show! Tickets are on sale now at Red Rock Books!