“So I guess it’s my turn for the third degree…”

Chloe opens her testimony with this line, which sums up how our characters will feel testifying to our audience about their involvement in the crime. A double homicide, hit-and-run, and attempted murder give them plenty to talk about in our upcoming show. But when it comes to giving them the third degree, how will translate that into a dramatic performance? Not to mention make the show travel to bookstores everywhere. In this behind-the-scenes post, we plan to lift back the curtain to reveal the secrets of our gameplay design for Famous Last Words.

Designing the way our mysteries become interactive is a tricky thing to work out. Designing them to travel is even trickier. But a major component of a Master Mystery Production is how we chose to make it interactive. We always want our audiences to have a part to play in the solution of our mysteries. Whether it’s simply voting on a ballot at the end of a play or asking questions of the suspects or searching for clues, there are dozens of ways we try to explore to make our mysteries come alive.

A lot of our game design work is based off the venue we perform in. Famous Last Words was written to be performed in bookstores. Without a set stage or seating, it takes a little more imagination to tell our story. Our first bookstore mystery show was Anonymous in August 2017 at Red Rock Books, which gave us a lot of background to work on when creating the new show. We wanted to learn from what the past taught us and improve on our designs. We took the idea of the scavenger hunt and altered it slightly.

We will be recording the testimony of our suspects on that classic bit of technology: the cassette tape. We’ll be using these as evidence tapes collected during the attempted murder of Marcus Watts, the infamous book signing where he planned to reveal new details of the McGregor case. In the traveling show, guests will get to search all over a bookstore for clues to the case, finding pictures, documents, and clues to unlock the testimony tapes, which will add further detail and information to the mystery. Put all together and the solution will reveal itself. 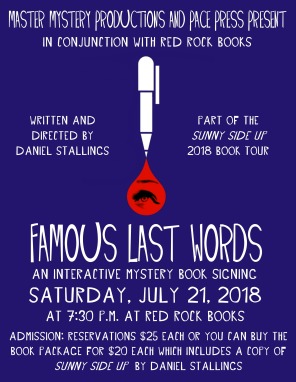 But those who will attend the Red Rock Books world premiere of Famous Last Words in Ridgecrest, CA on July 21st will receive a special treat.  The Red Rock Books premiere will be the only live show, meaning that the guests will meet the characters in person and in costume. They will see a map that will let them search Red Rock Books to find the suspects and hear the testimony in person. They will actually get to see the attack on Marcus and everything will happen live right before their eyes. It’s a once-in-a-lifetime performance of this Master Mystery Production.

Those are the secrets behind the gameplay for Famous Last Words. But you haven’t met our suspects yet. Stay tuned for our infamous character blog where the actors themselves will share their take on these sinister suspects in HOSTILE WITNESSES: The Making of Famous Last Words (Part 3)!