October 28th, so close to the ultimate dressing-up day of Halloween, closed out our fall season with a fashion show unlike any other.  Our guests dressed in their most glamorous and colorful frocks, donned the personas of powerful fashion mavens, and prepared to untangle the web surrounding the cold-case murder of a model…with the knowledge that one of them committed the heinous crime against fashion.  It was our twist on the killer world of couture as some feisty femme fatales found out who was the deadliest among them in our sixteenth show aptly named Femme Fatales.

It was a fun and festive way to finish a season at Master Mystery Productions.  We were greeted by an explosion of red and purple, the signature colors of our clients.  Gorgeous hats on stands and racks of shimmering clothes from dresses, wraps, and jackets surrounded the ladies.  Stiletto heels and sparkling jewels served as centerpieces for the tables.  Place cards featuring the colorful names of our suspects (and guests) were prominently displayed.  Jade, Coco, Sylvia Argent, Rosa, Lady Turquoise…they were all there.  And one of them murdered Willow.

Donning our brand-new Master Mystery Productions shirts, we welcomed our spectrum of suspects to an unusual memorial fashion show, a kind of chic wake to honor the life of Willow, a supermodel (played by Skeleton Key Winner Heather McGaha) whose career was cut short by strangulation.  It was two years ago that day that Willow was murdered backstage at Carmine Couture’s salon fashion show.  A collection of photographs and scant documents are the only clues that remain behind this mysterious murder.  The femme fatales had to figure it out.

The evidence ran the glamorous gamut of magazine pages, various ads Willow modeled for, mysteriously rejected images, backstage photos of a clandestine meeting, and even a shot of the murdered model.  It became a game of I Spy, trying to identify clues in each image or note and figuring out what each frozen action meant. What did the man pass her?  Why is Willow making the expression?  Why is her picture circled on that page?  Each image brought on a thousand questions. 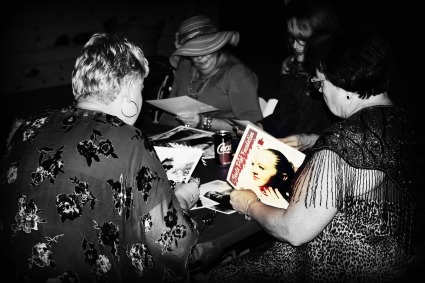 Some key interrogation and a deft knowledge of real-life fashion editors would help our teams of stylish sleuths earn more opportunities to study key pieces of evidence.  And in the back of their minds, one item persisted.  One of them was responsible for the murder.  Who had the motive, means, and opportunity to strike down the supermodel?  Would any of the teams be able to figure it out?  There was a moment of tension as it seemed to be one of the hardest mysteries we’ve ever presented.  Was Femme Fatales unsolvable?

Thankfully, that was not the case.  One team managed to point a bejeweled finger directly at the culprit and name the correct motive.  While we took one of the fashionable fiends into “custody” for the crime, the winning team, Sassy Sisters, collected their prize–four gorgeous hats including three made by legendary Master Mystery Productions costumer and Skeleton Key Winner Margit Stallings!  One of these hats was even featured in a Carmine Couture “ad” starring Willow.

But there was another winner that evening!  As per tradition, we presented the Skeleton Key Award for Service Above and Beyond to an individual who has dedicated huge amounts of time and effort to the creation and execution of a Master Mystery Production.  It is an individual show’s highest honor.  Congratulations Michelle Stallings for winning the Skeleton Key for Femme Fatales for your gorgeous photography! 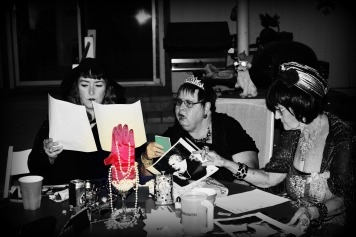 A fun, feisty, and fashionable show has closed out our 2017 season.  It was a joy and highlight to end the season surrounded by familiar face who mean so much to our history.  From Murder at the Red Fez to Femme Fatales, we have grown a lot as a company and as entertainers.  We only see more growth from here.  Thank you everyone who has been a part of this journey!

We can’t wait to see what the future holds!  All we can say is let it be mysterious and make sure to bring your little grey cells.  Sleuth on everyone!  And have a happy holiday season!