Crafting characters is something we at Master Mystery Productions work on from the ground up.  It’s more than just writing their dialogue.  It’s about translating a nebulous idea into a three-dimensional human being.  Everything from posture, walk, gestures, facial expressions, and voice is dissected and reassembled to create a dynamic character.  Ode to Agatha breaks new ground for us as audiences get to interrogate the suspects, allowing our actors to add their own unique embellishments to their character.  Now you get to learn from the cast of Ode to Agatha just what went into these poisonous personalities.

POISONOUS PERSONALITIES: THE MAKING OF ODE TO AGATHA (Part 3)

Character building is always vital to a Master Mystery Production, but in Ode to Agatha, with the audience directly interacting with the suspects through interrogation, the need for thorough characters was greater than ever.  Throw in a complex family tree, and you had a recipe for some of our most detailed suspects yet. 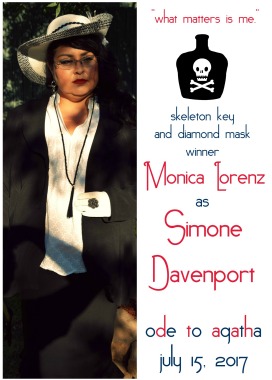 The eccentric and wealthy mistress of Shayle Court, Simone Davenport likes to think herself the lady of the manor and patron saint of the village, using her wealth and influence to chair many wartime and village societies.  However, she tends to view the village as her personal playground and uses the charity events as a way to promote her own interests.  She is a poetess with a flair for the melodramatic and theatrical despite the fact her poems are generally strange, incomprehensible ramblings.  A Skeleton Key Award winner and the winner of a Diamond Mask for Excellence in Performance in her role as Wilhelmina Blake in Bury Me in Paris (Spring 2017), MMP veteran, Monica Lorenz, returns for her third show and her first as assistant director for Ode to Agatha.  Here’s her take on the dramatic and eccentric Simone, lovingly called “Ode to Simone Davenport”:

“Simone Davenport, a gifted poet to the British masses,

Exudes a unique talent from her shoes to her eyeglasses.

With an eccentric style all her own, she graces the stage.

Seemingly blurting out what first comes from her brain,

Her words in prose come forth like clouds dripping rain.

If inspiration calls, she may perform an interpretive dance,

Charmingly swaying her captive audience into a trance.

With a plethora of confidence, she strides into any room.

A true and sincere friend to those foreign or friendless,

Although others may argue, she feels her love is endless.

Her immense wealth allows her the ability to do as she wants.

Alas, her household sees her actions as deliberate taunts.

Simone Davenport’s second husband, Tobias is an unashamed gold digger.  He makes no bones about marrying Simone for her money, and Simone does not disguise the fact she feels she has bought and paid for a prized possession by marrying Tobias.  They’re marriage is curiously placid as there is no deception between them.  Despite this, he is constantly unfaithful to his wife.  Writer/director of Ode to Agatha and founder of Master Mystery Productions, Daniel Stallings, takes on this character, and here are his thoughts on Tobias:

“Tobias is a scoundrel, albeit a clean, well-dressed, presentable one.  He is apathetic to most people other than himself and those who would better advance his position in life.  He is a lover of luxury and a life of idle riches.  I picture him with an arrogant, laissez-faire stride, no rush, no work ethic.  He is the idle rich, dressed in sporting clothes, but probably not making it farther than the local pub.  There’s a pampered cat quality to his movements, slow and graceful and indolent one moment, swift and sharp and clawing the next.  He’s a man who looks out for number one–himself.” 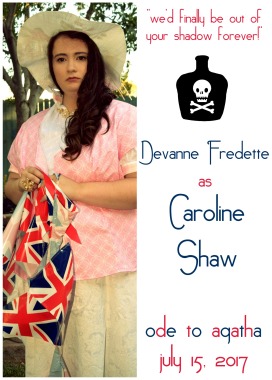 Caroline Shaw is Simone’s stepdaughter-in-law who married Simone’s stepson, Virgil, whom popular belief supposes will be the heir of Simone’s fortune.  Caroline is fiercely devoted to her husband despite misgivings about some strange letters she discovers in his writing desk.  Cool and reserved, Caroline is a consummate hostess and a voice of reason at Shayle Court.  Caroline’s devotion to her home, village, and the life of a well-bred Englishwoman are the core of her personality.  Master Mystery Productions favorite, Devanne Fredette, makes this show number three after The Last Garden Party and Bury Me in Paris and tells us about her character:

“It was very interesting to learn from my past characters about what to do and how to move.  However, it is still very much a challenge to keep this very proper British woman in line with her lines sometimes ending it sarcastic battles.  As a result, Caroline is different than most of my roles.  From the opposite of being shy, Caroline is rather loud in her complaints, which often puts her on edge with her family.  Also, as she is a strong woman and recognized as ‘a Swiss watch,’ her voice becomes deep with an even stronger accent.  All in all, her attitude, despite being a handful, is very fun, and I hope you enjoy the performance.” 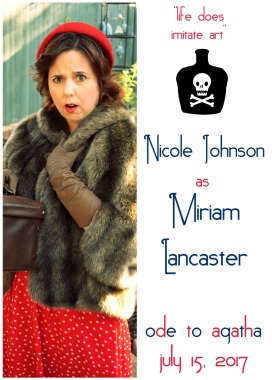 Miriam is on her dream vacation touring the British Isles and the locations of her favorite stories.  While on the train to Essex, Simone Davenport accuses Miriam of purse snatching, but later withdraws the accusation and sweeps the baffled woman to her country estate.  Out of place at Shayle Court, Miriam is uncomfortable in the family drama where she finds herself.  Newcomer to Master Mystery Productions, but no stranger to theatre, Nicole Johnson joins us in this role and gives her insights into what makes Miriam tick.

“I see Miriam as the perfect Southern belle.  She has grace and impeccable manners.  She works as a nurse, so she is a kind and caring person.  But make no mistake, she can also see through people.  Her favorite thing to do is read.  And her favorite author is clearly Agatha Christie.  Miriam’s greatest fantasy is to step into one of Mrs. Christie’s books.”

Simone’s former companion and housekeeper of sorts, Joanna used to run Shayle Court with iron determination.  She is a strong woman of a wide variety of quintessentially British interests: shooting, dogs, gardening, and a classic summer fete.  She has a clear affinity with Tobias over common interests, so common that they had a love affair under Simone’s nose.  But Caroline caught them and forced Joanna out of the house.  Joanna now works as a nurse in a neighboring village, but returns to Shayle Court for the fete.  Award-winning actress Katie Cozine (Diamond Mask for Flora Westcott and Skeleton Key Award, Bury Me in Paris, Spring 2017) joins Ode to Agatha as Joanna with her own interesting point of view on the character.

“Joanna Parth is the epitome of class in her own mind. She has a sharp wit and an equestrienne’s heart. Cleanliness is next to Godliness, and she is utterly appalled by disorder. She finds comfort in structure, reason, and practicality. She was pushed into the nursing profession by her mother, who saw the profession as the most noble and respectable her daughter could obtain. Joanna quickly discovered she had a knack for taking care of others, and thus flourished in her work. Introducing order into a person’s chaotic life, particularly if they were in need or ill is the greatest rush. Despite Joanna’s personality being dominated by the pursuit of perfection; she does indulge a burning desire to pursue something more scandalous: men. There is not much room in such a life for courting and romance; that takes too much time. Joanna fosters relationships of convenience, takes what she needs, and sweeps it all under the rug before it has a chance to settle; like so much unwanted dust.”

Rowena Shaw is Simone’s stepdaughter who is training to be a dispenser (a type of pharmacist in hospitals who mixed prescriptions).  She is a gentle, soft-spoken woman often overlooked because of her withdrawn nature.  Rowena feels she is a background character, which leads her to develop a lust for power and an unusual and dangerous hobby.  Despite her quietness, she has a wicked side.  Making her stage debut, Nicole Cepaitis, who won one of our nights at Bury Me in Paris, plays the role of Rowena Shaw and shares her experiences with the character.

“Trapped by years of familial expectations as the lowly stepdaughter, Rowena Shaw quietly conceals an anger and a desire to break free from the status quo. Outwardly, she is a no-nonsense and rather boring individual, a wallflower so to speak. Even so, she embraces a scientific resolve, allowing her to blossom in her prescribed tutelage. With intent, she attempts to remain outside the artistic and emotionally toxic dramas that play out in Shayle St. John. Inwardly, her escalating resentment has compelled her to create a more fanciful life, one full of drama/danger/death where she is not bound by the conventions that hold her in mortal life. While Rowena only allows glimpses of her internal self to those who ‘know her best,’ she enjoys showing off the morbid side of her personality to strangers solely to see their reactions.”

With only two weeks until the show, our suspects are polishing their performances for a special preview on July 6 for the Eastern Sierra Branch of the California Writers Club (Ridge Writers).  Master Mystery Productions will be the guest speaker at Ridge Writers’ July 6 general meeting in a panel with our current and past actors in a discussion of the kind of writing that speaks to us as performers.  Afterwards, there will be a special preview of Ode to Agatha.  The meeting starts at 6:30 p.m. at Ridgecrest Presbyterian Church.  The public is invited, and admission is free!

And remember to buy your tickets for Ode to Agatha!  They are $20 for single tickets, $30 for two, and they are available now at Red Rock Books!

Our suspects need to be dolled up for their big show.  From creating a head to toe black-and-white diva look to a spangled and bejeweled caftan a la the Union Jack, learn about our dramatic period costumes in Dress Code: The Making of Ode to Agatha (Part 4).