One of the broader themes explored in our latest interactive mystery is the interplay and integration of masculine and feminine.  From the subtlety of Wilhelmina’s pen name to the overt qualities of “Massimo’s” character, the mixing of these elements reflects not only the liberation and expressiveness of the bohemian world of Montparnasse, but also the shifting landscape of women’s rights during the 1920’s.  Writer/director of Bury Me in Paris, Daniel Stallings, and Katie Cozine, who plays Flora Westcott in the show, will discuss together how the show intertwines these notions both visually and within the story itself.

MASCULINE VS. FEMININE: THE MAKING OF BURY ME IN PARIS (Part 2)

The 1920’s changed women’s lives forever.  In the US, women earned the right to vote in 1920.  Trousers became popular.  Women cut their hair short.  It was revolutionary time as women took greater power.  Exciting and liberating, the 1920’s changed the world forever.

With Bury Me in Paris, there was always a desire to showcase this dramatic shift in women’s power, a wish to blend the old-fashioned views of masculinity and femininity in both a bohemian and a contemporary blend.  Paris was free and open with its embrace of differing cultures and viewpoints, and Montparnasse was home to some of the most radical thinkers of the age.  We could, through story and visuals, show this radical change and play it up as part of the brilliant and bohemian world of the Left Bank artists.

An original script for Bury Me in Paris had the characters played very straight–three females and three males.  However, when auditions came around, not enough male actors came, which created a peculiar problem.  We had far more women who came to try out.  So the characters had to be reexamined, and an idea formed.  Paris is wonderfully expressive.  Who’s to say we couldn’t have women in those male roles?  We don’t simply mean dressing the women as these male characters, but restructuring the characters to embrace both sides.  More androgynous personalities to accompany the Madame Mustache, the original bohemian blend of masculine and feminine.  But no character backgrounds or motivations were altered.  We believed that every motivation could equally apply to any gender identification.

In production, we wanted to find as many visuals to blend the two concepts together.  Whether it be a costuming choice, a gesture, a turn of phrase, or an acting decision, the details ranged from subtle to extravagant.  Take the character of “Massimo.”  She’s the most overt example of this idea.  Originally a male character, we retained the name and characteristics and chose to make the role a more androgynous character to contrast with the more prominent feminine visuals due to a largely female cast.  The actress got to wear trousers, suspenders, fedoras, and other more traditionally masculine trappings to celebrate the more liberated gender identity for women in the 20’s.  The character was meant to be bold and challenging to stereotypes, retaining the original name and mixing the pronouns to make a more dynamic character.

Other ways we have mixed the two concepts are often more subtle.  Wilhelmina is a good example.  She goes by “Willie” in her group of friends, and her pen name is Willie Blake.  There are moments when she holds her elegant cigarette holder in her teeth like a cigar, giving her this almost Charlie Chaplin impression.  And we cannot forget Chantal, the infamous Madame Mustache, who paints a lavish mustache on her face to defy convention.  All these and more add to the complexity of our female characters and reveal them as the liberated, thoroughly modern characters they are.

But does our story relate back to history?  Katie Cozine, who shall play Flora in Bury Me in Paris, tells us more.

The 1920’s marked the beginning of many firsts for women, which quickly thrust them onto an even playing field with men. Women worked outside the home and brought home a paycheck. Women earned the right to vote. The flapper was born: a young lady with drastically short hair, and an even shorter skirt who drank, smoked, and used language, as well as behavior, that were previously considered unbecoming of a lady. Bury Me in Paris is comprised of a cast that is over 70% female, and each embodies these quintessential humors of the 1920’s.

Massimo is ambiguous in terms of gender, showcasing both feminine and masculine qualities. The character dresses in slacks while all of the decidedly female characters in the show are clad in dresses; however, this may not be as telling a detail as one assumes. The Great War was a large stone thrown into the pond that was 1920’s Paris, and fashion was not exempt to the resulting outward ripple. The delay in shifting fashion trends propelled women’s fashion from modest and impractical to modern, sensible, and unconventional. Massimo’s sense of style may simply be a product of the time.

Wilhelmina appears to be the strong and silent type; however, she may only hold her tongue to serve a purpose. She is seldom seen without her elegant cigarette holder, which serves to punctuate her quiet dignity, grace, and general air of intimidation. She is not afraid to assert herself, a cigarette clenched in her teeth, and make her opinions and inclinations known.

Chantal is a force onto herself; she has penned an autobiography under the name Madame Mustache, a name she has given herself due to the mustache she paints on her own face every day, so that she will not be judged solely by her appearance. She is embracing a physical interpretation of masculinity to dull her perceived femininity, and thus donning a fierce, sharpened appearance akin to her cut-throat nature.  The notion of Madame Mustache has taken the Paris art scene by storm, and perhaps Chantal has painted herself into an ironic corner as the persona of Madame Mustache has garnered her more attention than ever before. 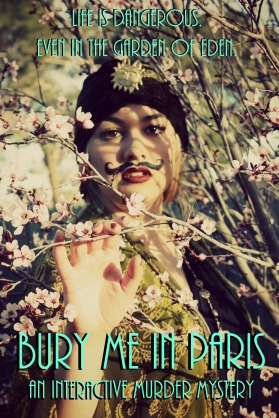 With creative visuals, Bury Me in Paris proves to be one of our most artistic shows yet, as befitting a mystery starring a cast of bohemian artists.  But who are these artists?  Join the cast as they talk about what makes their characters tick in Artistic Temperaments: The Making of Bury Me in Paris (Part 3)!