Skip to content
Posted on December 29, 2016 by Master Mystery Productions 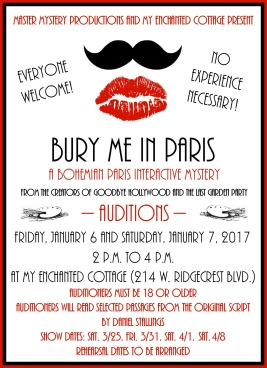 Bonjour.  Have you ever wanted to act in an interactive mystery? Master Mystery Productions and My Enchanted Cottage and Tea Room, creators of Goodbye Hollywood and The Last Garden Party, are teaming up once again to create a new show, this time set in the joie de vivre of 1920’s Paris, and we need actors.

BURY ME IN PARIS

BURY ME IN PARIS show dates are: Saturday, March 25, Friday, March 31, Saturday April 1, and Saturday, April 8, 2017 at 7 p.m. at My Enchanted Cottage in their Enchanted Garden outdoor dining space. It’s a beautiful, unique space that gets a beautiful, unique show written and directed by Daniel Stallings. Rehearsal dates and times will be announced after auditions. Due to the nature of the event, we ask auditioners to be 18 or older. Audition forms will be available at auditions.

There are 3 male roles and 3 female roles. We welcome everyone of all types and levels of experience to take part in the show. No theatrical experience is necessary. Auditioners will be reading selected passages from the script. Master Mystery Productions will compensate actors for their work. 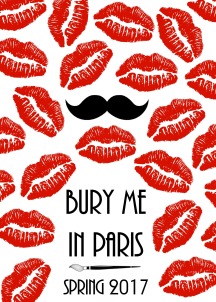 Paris, 1924. In the neighborhood of Montparnasse, artists, writers, and rebellious socialites lived la vie boheme in their studios and salons on the left bank of the Seine. The most notorious of the bohemians was Chantal, the infamous “Madame Mustache.” A liberated woman and eccentric character, Chantal has chosen to paint a mustache on her face with makeup so as not to be judged by her beauty alone. Flitting from art to art (and lover to lover), she has lately been crafting her magnum opus of her highly fictionalized life story entitled Bury Me in Paris. But someone in her fabulous inner circle has not found this story quite as charming and has taken to threatening Chantal’s life. Who wants to bury her in Paris for good? Join a cast of chic and suspicious artists as they share gossip, secrets, and passions in the magic of 1920’s Paris and help them solve a mystery that might make living the bohemian life a very difficult occupation. 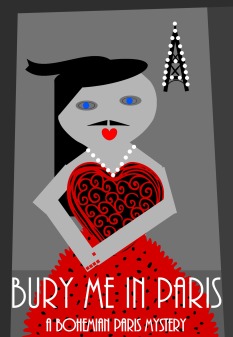 CHANTAL–The Muse of Montparnasse, Chantal is an infamous character in bohemian Paris who earned her moniker “Madame Mustache” from painting a mustache on her face in makeup to defy and disorient those who would judge her on her appearance. A striking, formidable personality, she is a liberated woman of the age who has flitted from modeling to painting to music to photography to literature as frequently as she flits from lover to lover. She has been working on her biography, Bury Me in Paris, for a number of years and has started receiving mysterious death threats as her book nears publication.

EDGAR GIRAUD–A Parisian painter whose work has finally started to catch buyer interest, Edgar is Chantal’s current lover and the artist she has helped promote. Popular opinion believes that Edgar was the artist who created the famous “Madame Mustache” painting which Chantal modeled for, thus making her a star in the salons of Paris. Edgar is silent and observant, but has grown increasingly irritated by Chantal’s presence in his life. He aims to break free of the hold she has on him.

ZOE FOX–The young, expatriate ingénue from the United States who sought the glamour and style of the Old World in order to escape the confines of her small town. Shy and naïve, Zoe is swept into the bohemian wonderland of Montparnasse by the heiress, Flora, who invites her to a lavish party. The painter, Edgar Giraud, has proclaimed her his new muse. However, Edgar’s interest in Zoe has struck a chord of vicious jealousy in Chantal.

MASSIMO D’AMATO–A rival of Edgar Giraud, Massimo is an impoverished artist whose work is still largely uncelebrated. A talkative contrast to Edgar, Massimo is fond of wine, women, and wit, so much so that his preoccupation with them have let his artistic progress falter in recent years. However, he contends that he is the true artist who created the “Madame Mustache” painting, and this argument has driven a wedge between him and the other artists at Montparnasse. He was once Chantal’s lover, and he still harbors some lingering feelings for her.

FLORA WESTCOTT–The heiress to the Westcott railway fortune, Flora is living the fast and loose life of a flapper with the bank balance to support it. She spends her days knocking back cocktails, wooing artists in the sidewalk cafés, throwing parties in the studios, and collecting art for her impressive collection. Warm, friendly, always ready with an eager introduction, Flora is the one who introduces Zoe to Montparnasse. Her relationship with Chantal is cordial, but strained for reasons no one has been able to figure out…until now.

WALTER J. BLAKE–American expatriate writer and publisher of the magazine, Promenade, which publishes many bohemian writers of the age, Walter is Chantal’s latest conquest as she hopes to use his knowledge to help her publish her memoirs. He is a world-wise traveler who has journeyed around the world in search of his stories. He is skeptical of Chantal and her antics, being the first to put forward the theory that the threats came from Chantal herself. His greatest ambition is to one day explore the moon after being inspired by the film Le Voyage dans la Lune.

We hope you are able to attend the auditions. Let’s bring the magic of 1920’s Paris to life! Bon chance!

Reviews about Master Mystery Productions from past clients, actors, and press: https://mastermysteryproductions.com/testimonial/