The month is November. A group of school-age girls play tag and hang out at an old bridge in their town. It’s after school. One girl, Suzie, is already bored and dreaming about having school on the moon, which her friends scoff. But Suzie has a trick up her sleeve. She has a story her late father told her, a story to rekindle the imagination in anyone. A legend of the high seas, of talking parrots, of buried treasure. The Legend of Cutlass Kate. Because Suzie wants all of us to remember one thing: Never stop dreaming. Imagination is crucial to us at Master Mystery Productions, and we wanted to embrace a child’s vision of the open seas and the swashbuckling spirit of pirates in our twenty-first production and final show of 2018 we called Mutiny on the Sea Witch.

Mutiny on the Sea Witch marked our first partnership with the Ridgecrest Community Theatre Troupe, which had put on shows such as Escanaba in da Moonlight, Patient A, Measure for Measure, Othello, and Evil Dead: The Musical. As such, this was the first time both of us had produced a family-friendly play starring kids. While we were nervous about pulling off such a show, we were also excited and eager to get to work. The play was all about having fun, and we aimed to make this show as fun as possible.

Armed with their (fake) swords, fabulous and unique pirate costumes, and the most amazing pirate ship, our cast took to the stage with a fantastic pair of sea legs, wowing their director and the RCTT board. They were a pure delight to work with, reminding us of the fun on purring on a show. But of course, the young talent debuting in their first MMP show had some doubts of their own. Would they have crippling stage fright and forget all their lines (something they loved to tell their director)? How would they perform in front of an audience? Would audiences like the show? And, in perhaps one of our riskiest decisions, how would our youngest performers–ages 4, 8, 9, and 10–handle opening the show to a cold crowd every night without any adult help onstage?

Our cast were brilliant with all these challenges and faced them like true professionals. Our youngest performers were wonderful when they opened the show, never letting nerves get to them. The charming story of Suzie and her friends and the theme of dreams and imagination set the stage for Cutlass Kate and her crew of scallywags to take over. They’ve been on a dozen-year voyage for the fabled Loot of a Thousand Ports, and, while they inch ever closer and Kate gets ever more obsessed with the Loot, her crew starts to mutter about mutiny. When a series of thefts rock the Sea Witch, Cutlass Kate will have to everything she can to keep her crew focused on their dream while trying to find the instigator of the mutiny before disaster strikes. A sassy talking parrot, a thrilling sword fight (choreographed by Skeleton Key and Diamond Mask Winner Brianne Hardwick), plenty of sight gags for the audience (How does pirate laundry taste, Heather McGaha?), and a mystery to keep you on your toes made for an exciting show. On closing night, we had our best crowd yet. Their laughter and cheers filled the Old Town Theater, and the actors gave it everything they had on that stage. Audiences and critics loved our show, and the kids were thrilled to get to tour our pirate ship, steer the wheel, and meet and feed Polly the Parrot.

Closing night at Master Mystery Productions is always a special occasion as we present our production and company awards. We had a big roster of awards to hand out in this show–four in total. We began, as always, with our oldest award which started when our company was founded in March 2015–The Skeleton Key Award for Service Above and Beyond. The Skeleton Key goes to a member of the production who has stepped up and pushed that extra inch to take a show to the next level. Their hard work and dedication to producing the best theatre they can is outstanding, so we honor them with this award. The honoree for Mutiny on the Sea Witch built our entire pirate ship set, producing one of the most amazing and magical sets we have ever worked on. He has been a longtime recipient of what he terms “reflective glory,” but at closing night, the glory was his and his alone. Congratulations Michael Stallings for winning the Skeleton Key Award for Mutiny on the Sea Witch!

The Diamond Mask Award for Excellence in Performance is voted by the audiences of our shows. Think of it as our own Oscar for Best Actor or Actress. Audiences vote for their favorite performances, and those actors are forever honored as Diamond Mask champions and their roles venerated as award-winning roles. Performers can win the Diamond Mask as many times as possible with the first win being honored by a specially designed diamond pin and subsequent wins receiving a diamond chain to add to it, eventually creating a “cascade of diamonds.”  Mutiny on the Sea Witch saw perhaps one of the most even spreads in MMP history with many contenders being just a handful of votes away from each other. Three champions were selected by closing night. Congratulations to Devanne Fredette, Jonathan Blair, and Janis Kunz for your Diamond Mask winning performances!

The awards continued as the Ridgecrest Community Theater Troupe presented their Blood, Sweat, and Tears award they began during their previous show, Evil Dead: The Musical. Similar to the Skeleton Key Award, the award goes to individuals who have gone that extra mile both onstage and backstage to bring a show to life. Two cast members were honored at closing night. Congratulations Devanne Fredette and Janis Kunz on winning the Blood, Sweat, and Tears Award! 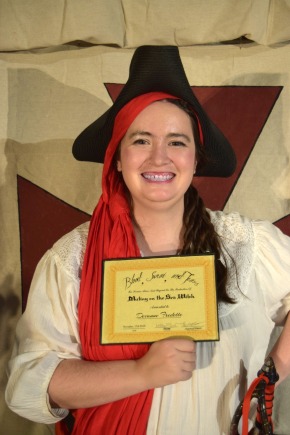 Finally, there came the most prestigious award of the night: The Founder’s Award for a Year of Outstanding Service. This award is one of the hardest to achieve at Master Mystery Productions and is the company’s highest honor. It is given to an individual, company, organization, etc. who has gone above and beyond to promote and grow Master Mystery Productions over the course of an entire production year, in this case from January to November. The winners of this award have stood out as some of the most dedicated members of the company and have done so much to make Master Mystery Productions one of the best theatre producers in the area. The individual who won the Founder’s Award for 2018 best exemplified the qualities we look for in an MMP cast member. She has been dedicated, hard working, and never gave up, even if things didn’t turn out like she hoped. She worked so hard to make the best theatre she could. She worked on four out of five shows for MMP this year and contributed so much in terms of music production, set design, assistant directing, acting, and so on that she was the clear winner all the way back in July. She is a star, and we are grateful to have her in our company. Mega congratulations to Devanne Fredette for winning the Founder’s Award for 2018! Devanne has now made history by being the first person to receive THREE different awards during the same show. Outstanding!

Mutiny on the Sea Witch was one of the most fun shows we have ever produced. The energy and spirit of the kids and adults who took part was infectious. They brought a smile to everyone’s face every single night. It helped remind everyone of the true magic of theater, how it inspires dreams in all of us from an eight-year-old wannabe pirate to an eighty-year-old couple watching a play together. We were delighted to bring this show to you. And what a phenomenal way to close a phenomenal season. We ask you to never forget the hidden message of Suzie’s pirate tale: Never stop dreaming.

That’s a wrap on the 2018 season from Master Mystery Productions! But never fear! We’re gearing up for a big and beautiful 2019 season with all new shows and mysteries for audiences of all ages to enjoy. Stick around and see what magic we’re going to share with you next. And have a happy, healthy holiday season.