Something exquisite is in the works at Master Mystery Productions.  We are crafting our love letter to opera and salute to the theatrical traditions of the 19th century operatic stage in our eighteenth production, Exit Prima Donna.  An ambitious and challenging project, the show combines opera, musical theater, melodrama, masquerade, and murder mystery into a superb blend of secrets, surprises, and song.  But where did the idea for this larger-than-life production come from?  Step behind the curtain for a moment as we tour the backstage secrets with writer/director, Daniel Stallings on the creation of Exit Prima Donna.

CONFESS YOUR SINS: The Making of Exit Prima Donna (Part 1)

Inspiration abounds at MMP, and we never really have to stretch to far for an idea that just clicks.  Exit Prima Donna, a murder mystery opera, was a super, crazy, ambitious idea that felt years from realization.  The genesis of the show came from a desire to work with a past MMP performer, inaugural Diamond Mask for Excellence in Performance winner Celese Sanders who rose to acclaim in our eighth show, The Last Garden Party, in 2016.  A musician and a singer (especially in opera), Celese was always keen to work with us but was torn between her love of musicals as well.  So we decided to create our own murder mystery musical.  Easy, right?  It always seems easy when it’s just a dream.  But Celese was ecstatic about the idea.  Especially when we brough forward the idea of performing at the legendary and haunted Amargosa Opera House, where she once performed.

Sadly, a turn of events prevented Celese from performing and working on this iteration of Exit Prima Donna.  But she has vowed to help revive it in the future.  Her devotion to the show never wavered as she helped with auditions and casting and musical arrangements and so on.  Her tireless work earned her a special Skeleton Key Award for the show.  Well done, Celese!

So you come up with this wild idea of staging a murder mystery opera in the middle of Death Valley in a gorgeous and haunted opera house.  But now you need a story.  So where did the story behind Exit Prima Donna originate.  It all started with research into the world of opera.  We asked New York opera singers for advice in what an opera contains.  Melodrama.  Passionate affairs.  Mistaken identities.  Passion. Loyalty.  Obsession.  Revenge.  As we researched, we started selecting public domain arias and opera pieces, some of the most legendary pieces in history, and earmarked them for inclusion in the show.  Those pieces, carefully selected, told their own story of tragic deaths, vacillating lovers, drunken revelry, and sacrificing everything for your art.  The story seemed to blossom before our eyes.

Several ideas quickly took shape.  We wanted to set the show in Italy, the heart of opera.  Venice was a beautiful location with an opera history, and the idea of a masked ball inspired by Venetian Carnival was too good to pass up.  We wanted it in the late 19th century to celebrate the high point of classical opera.  1899, a powerful transition year, fit perfectly.  We knew we needed a prima donna.  But a history of past prima donnas–one who exited herself under traumatic circumstances–started to form in our imaginations.  You may be surprised by what happens to the prima donna referred to in the title.  Can you guess which one?

With masks in play, we crafted a truly frightening masked villain.  Then we began populating our fictional opera house with the characters you’d expect to see.  The runner-up diva.  The father figure baritone.  The overblown oversexed tenor.  The humble dressers who are still human beneath it all.  All of them tied together with a dark history spelled out in a confession, lipstick on an old mirror, and bouquet of black roses.  Curious?  Well, you’ll have to see the show to learn the truth.

In terms of literary and opera inspirations, we found muses in a number of works from Mozart’s The Magic Flute, Verdi’s Rigoletto, Andrew Lloyd Webber’s The Phantom of the Opera, Edgar Allan Poe’s “The Masque of the Red Death,” and even our past show Goodbye Hollywood.  A whole symphony of story elements blend together in this original story of the human heart and all the different sides of love.  A mother’s love.  A fan’s love.  A lover’s love.  It all comes alive in Exit Prima Donna. 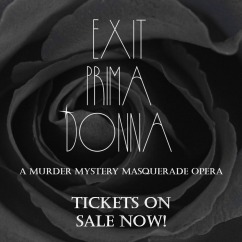 So that was the birth of our murder mystery opera.  But it isn’t an opera without music. Stay tuned to learn more about the music we selected for the show and how it works in the story in our second post in our behind-the-curtain series–Malicious Melodies: The Making of Exit Prima Donna (Part 2).

And be sure to buy your tickets!  Word is they are selling well.  Contact the Amargosa Hotel Front Desk at 1 (760) 852-4441 and reference Exit Prima Donna to reserve your seats.  If you have any issues contacting the hotel and opera house, email them at deathvalleyjunction.backstage@gmail.com with your name and phone number and they will contact you.

We hope to see you at the show!

One thought on “Confess Your Sins: The Making of Exit Prima Donna (Part 1)”