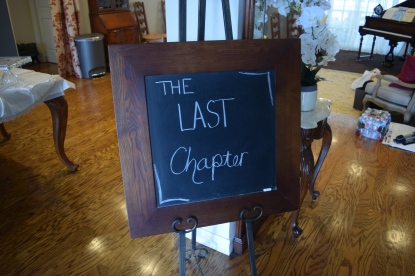 February isn’t a typical time for ghosts, but at Master Mystery Productions, it’s par for the course.  For our seventeenth show and the first one of 2018, we invited some of the greatest literary talents in history for a different sort of post-mortem: an afterlife writers retreat. But a vicious attack on an author’s legacy will turn the focus from debate to detection as the guests try to uncover who has chosen to rewrite the ending of The Last Chapter.

With a gorgeous home to serve as our set and a gently moody day perfect for ghost writers, we brought our magic, mystery trunk filled with prizes, clues, and challenges for the guests.   Exquisite literary decorations flowed from every room.  The dining table festooned with books, wax candles, reading glasses, quotes, and delectable treats, a buffet paradise for any starving artist.  Scattered around the beautiful home were a series of challenges the guests would solve in their teams, each decorated with a landmark representative of their inspiration author.  We had a stuffed raven for Poe, a crown for Christie (the Queen of Crime), a skull (alas, poor Yorick) for Shakespeare, etc.  There was even a cascade of Dickens pages fluttering up the stairs.

Seven guests took on the challenge to be actors for the show, each playing one of the seven authors.  Each dressed in all white, often with images of the authors displayed on their shirts.  They went the extra mile with their props.  Agatha Christie brought her knitting, Emily Dickinson had a shawl, Dorothy Parker had a cigarette (and an ever present cocktail glass), and so on.  Theses actors took the challenge to heart and created fun and hilarious encounters for the audience to enjoy.  Shakespeare would keep Parker and Hemingway from sneaking off for romantic interludes.  Dickinson and Poe would dart away whenever someone looked at them.  And Dickens cracked jokes about the afterlife.  Everyone got into–pun fully intended–the spirit of things.  Inspired by the first-time visit of Dame Agatha Christie to this retreat, the host, Charles Dickens (played by writer, Scott Barnes) issued his challenge: Could any of them solve the unfinished Mystery of Edwin Drood?

But a shocking twist would change the whole focus of the challenge.  The assistant brought out a copy of a Dickens book…stabbed in the heart with a quill and bleeding ink.  Stunned and horrified, Dickens started to grow ill.  Because the only way to keep a writer connected to this world after they die is through their works.  Destroy the words…destroy the creator.  And someone had it out for Dickens.

Through the themed challenges, guests hoped to collect a series of seven cryptic clues, each a puzzle piece that would lead to the solution.  The challenges ranged in difficulty and style, including secret codes, guessing games, and trivia challenges.  Guests, now broken into teams, were able to collect several clues and gained a new appreciation for just how complex these writers could be.  We definitely got in our exercise as we raced back and forth between challenges to check the teams’ work.  Whew.

The guests were high energy and committed to solving the challenges, making it all fun and light-hearted, even as Dickens gave us his Meryl Streep moment in a highly theatrical “death” scene.  But of course the big question is: Did anyone solve the mystery?

Yes.  In a historic first, we had a tie.  A powerful team of two who seemed invincible.  They collaborated from start to finish, completing 6 out of 7 challenges and providing the same answer on their individual ballots.  One of them played our William Shakespeare.  The other was an English teacher.  And they took home the gold.

But they weren’t the only ones! Following tradition, we presented the Skeleton Key Award for Service Above and Beyond to a person who has dedicated so much hard work and energy to the creation and realization of a Master Mystery production.  This show’s very deserving winner was none other than Chautona Havig, an author who played Ernest Hemingway in The Last Chapter and who did so much to bring us to Orange County for her writers group.  Thank you and congratulations Chautona!

A final surprise for the evening came in the form of the Diamond Mask Award for Excellence in Performance.  We wanted to share this unique and hard to earn award with those brave souls who took on the challenge of performing a character, many for the very first time.  They all were brilliant and fun and committed, but one earned the crowd’s adulation.  By majority vote, Challice Neipp, who played the witty, sharp, sly, and sarcastic Dorothy Parker won the Diamond Mask for her portrayal, and the look of surprise on her face was worth everything.  Well done and congratulations Challice!

It was a wonderful, heartwarming, brilliant, and fun way to start our 2018 season. We had so much fun performing in that beautiful house for an audience of excited guests ready to dive head-first into our mystery.  The performances delighted and surprised us, and we are already ready to return for another show in the future.  Thank you so much for letting us share The Last Chapter!

But first things first…we have an opera to attend.  A magical, musical, murderous opera.  Featuring some of the strongest talent we have worked with along with dazzling newcomers, gorgeous costumes, and performances to die for, we proudly present a one-of-a-kind experience that is set to make history forever as we perform in the legendary Amargosa Opera House in Death Valley.  We present to you a dramatic tale straight from the canals of Venice in 1899 in…