When you design a show around fashion, such as our upcoming Femme Fatales, you need the fashion.  Everything from clothing, accessories, and jewelry needed to be plotted out in order to make convincing imagery to use in the photography for the show.  Not only that, it gave our clients a fun reason to play dress up and come to the show bedecked and bedazzled in bright colors.  Dressing up can be a lot of fun, and we certainly had fun dreaming up the fashions our model would wear for her many photo shoots.  But did you know many of those fashions had previous lives in earlier Master Mystery Productions?  Learn about the past lives of our Femme Fatales style in our final behind-the-camera installment!

WOULDN’T BE CAUGHT DEAD IN IT: The Making of Femme Fatales (Part 3)

In a blog post from earlier this year (Unique Uniforms: The Making of Anonymous), we talked about the importance of styling a costume as it is the last step to turn a costume into a character.  Everything from basic white shirts and dark trousers (like in Anonymous) or our more elaborate creations (like in Bury Me in Paris) can be restyled to fit whatever show we’re working on to create the character we need.  With our fashion-themed show, we weren’t going spend thousands of dollars on Chanel, Gucci, and Prada.  We wanted to create our own fictional fashion lines and dug deep into our costume archives to find the perfect clothes, accessories, and more.  In a way, it’s fashion Easter Egg hunt, and fans of Master Mystery Productions may recognize a few of the pieces we used from prior shows.

When we thought about what costumes and accessories we could use for our fashion photos, we immediately considered our historical shows set in periods such as the 1920’s and 1940’s.  Many of the shows in those eras were highly glamorous and loaded with dresses, gowns, coats, jewelry, and so on.  We wanted to make sure these costumes didn’t read as the historical pieces they were meant to be.  Mixing and matching pieces along with hair and makeup took vintage glamour into modern chic.

For instance, the silver dress seen in the Goddess Luxury Jewelry ad above was actually worn by McGaha in Bury Me in Paris.  The fur cape draped over the chair was in the same show worn by Devanne Fredette AND in Ode to Agatha worn by Nicole Johnson.  The flower ring was in Ode to Agatha, and the watch was worn in Anonymous. 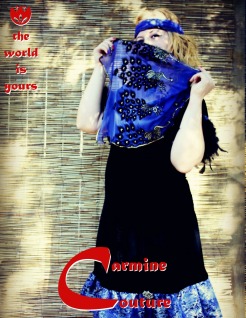 Much of the Carmine Couture fictional fashion line was supplied by Bury Me in Paris including two dresses, a gown, and the peacock scarf worn by Cat Kusznir.  The purple silk belt worn in the Femme Fatales magazine story and in the Carmine Couture ads was first seen as General Major’s neckwear in The Last Garden Party. 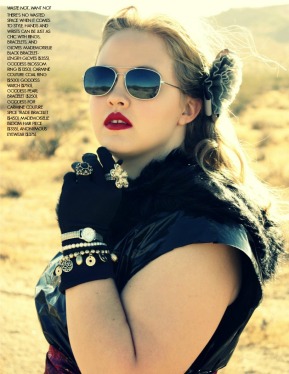 It was all about combining things in ways they hadn’t been seen before.  Like the silk belt.  It used to be a kind of cravat.  We made it a belt.  What if that shawl could be a headpiece?  We realized a monocle from The Last Garden Party could also be a necklace.  We just played with all the clothes and accessories we had.

In naming the “designers” of the pieces in the magazine story, we placed many an Easter Egg to past shows or production details on Femme Fatales.  Such as the brand “Ether” being a code for Heather McGaha, the name of our model.  There’s “Mademoiselle,” a Bury Me in Paris reference.  See if you can uncover the others.

To create these amazing fashions, we didn’t have to unload a bank account on clothes.  We just went into our closets and archives and played.  And really, isn’t that the fun of dressing up?  We’d be okay being caught dead in some of these looks. 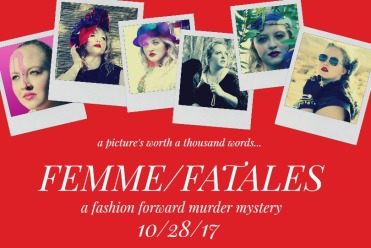 And that’s the behind-the-lens scoop on the making of Femme Fatales, our final interactive murder mystery for the year 2017!  In just a few days, we’ll be headed off to Bakersfield to premiere this show for our clients.  We can’t wait to see how they figure it out.  And for those of you who want Femme Fatales for yourselves, it will become available for resale on Halloween, the perfect time to dress up, don’t you think?

We’ll see you at Femme Fatales this Saturday!

One thought on “Wouldn’t Be Caught Dead In It: The Making of Femme Fatales (Part 3)”