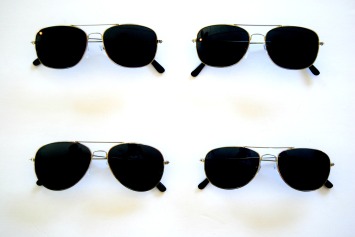 Utilitarian.  Militant.  Refined.  Monochromatic.  Conformist.  Those are the ideas that come to mind when we think of secret agent, Men in Black-style uniforms.  For Anonymous, we wanted to create an imposing wall of agents all dressed to match, mirrored sunglasses disguising their eyes.  An intimidating sight.  But even the strictest, most soulless agent has style, and we wanted to take the idea of a basic uniform and modify it just enough to give each agent a sense of character.  Let’s find out the hundred and one ways you can style a basic white shirt.

Anonymous is the story of secret agents belonging to a mysterious artifact retrieval agency hunting down a master thief by the code name Anonymous.  Our costuming had to reflect this institutional and professional dress while still give it character.  If you look at a setting where employees are required to wear a standard uniform, there are all sorts of microscopic, sometimes even unconscious touches that personalize the uniform just for that individual employee.  It’s more than just decoration.  It’s how they tie an apron or necktie.  How a vest sits on them.  Is their name tag crooked or straight?  How are their sleeves rolled?  These touches, this styling, is how we personalized our secret agents in Anonymous.

The costume brief was the same for all the agents.  We deliberately kept it gender neutral.  White dress shirt.  Black pants.  Matching mirrored sunglasses.  Black shoes.  Watch.  If we had any male actors, a black necktie.  Clean.  Simple.  Uniform in design.  As you can see from the above photo, they all look like professionals.  But another glance reveals the personality of each character, which was carefully styled.  So how did we do it?  We examined each character’s traits and came up with ideas for the styling that emphasized those traits.

Agent Battle is the lead on the mission, and he should lead by example.  He is strict, uncompromising, inflexible in his attitude and his way of handling his subordinates.  His costume had to be the most literal, correct, polished, and unyielding translation of the brief.  Sharply dressed and perfected within an inch of his life, Battle doesn’t exude any personal style or even his personality.  He keeps it buttoned up and focuses on the mission with iron determination.  So we styled him with extreme precision: tie perfectly straight, shoes highly polished, sunglasses perched perfectly, cuffs starched and straight and turned crisply, shirt tightly tucked in.

Agent Sly is almost the exact opposite.  He’s not an agent in the traditional sense; He’s an expert consultant brought into the Artifact Retrieval Agency to provide insight into Anonymous’ methods.  He was originally in prison as a thief once caught by the A.R.A.  As such, he doesn’t really give a damn about professional presentation.  He’s habitually lazy and carefree, often blowing off the mission as simply “fun and games.”  We didn’t want him to read too buttoned-up.  It was better that he looked almost dressed at the last second.  Cuffs indifferently rolled.  Tie loose and uneven.  Rumpled clothes like he just rolled out of a cat nap.  The look of a man who would rather be sleeping than working.

Agent Race has our most subtle characterization.  He’s a man used to motion, an agent who is most comfortable in action rather than at rest.  He is at his best when he is working.  He’s constantly on the move, impulsive gestures, impatient, always wanting others to pick up the pace.  He frequently checks his watch, fusses with his necktie, rolls his cuffs, taps his fingers, paces around the room.  So his styling needed to reflect this energy on constant motion.  The tie, a victim of constant correction, is just a hair askew.  His cuffs are rolled to the elbows hastily, a man ready to dive his hands into work, impatient to get started.  His shirt isn’t too neatly tucked in, his body always moving.

Agent Paxton is played by the sole woman in the show, so her styling was already going to be different from the others.  Paxton is the peacemaker, the one who handles negotiations and believes in keeping the peace between all parties.  She functions as a kind of second-in-command to Agent Battle, although he doesn’t really respect her contributions.  She’s under a lot of stress during this mission.  Paxton was presented as a competent, professional woman who dresses simply and sensibly for her job.  While her brief was the same as the others, we made some alterations to feminize and humanize her.  Her hair is styled into a professional twist.  She doesn’t wear a necktie, but a nice, simple necklace with a red jewel.  Her lips are painted red, but kept very clean.  A little dolled up for the mission, but not beyond the realm of secret agents.

Our agents have followed their rigorous dress code to a T.  But a little personality always worms out, and it will be fascinating to see what secrets get leaked during the performance of our fourteenth Master Mystery Production, Anonymous.  In just a few days, the secrets are unlocked, the agents will eavesdrop, and Anonymous will be unmasked.  Join us on August 19 for an after-hours adventure no one will ever forget!

One thought on “Unique Uniforms: The Making of Anonymous (Part 4)”